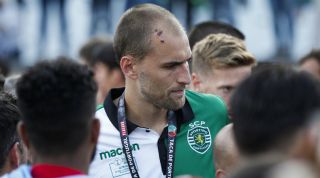 The four players informed the Portuguese Security Markets commission on Monday that they were breaking their contracts with Sporting.

The players have claimed "just cause" following an attack on the Sporting squad by a 50-man gang in May at the club's training ground – one incident in a string of sorry moments for the Portuguese giants last season.

The incident took place just days before Sporting's shock 2-1 defeat to Aves in the Portuguese Cup final on May 20, and left striker Dost nursing a nasty head wound.

Head coach Jorge Jesus has already left for Saudi club Al-Hilal, while goalkeeper Rui Patricio and winger Daniel Podence had already informed the Primeira Liga side they would be leaving. Patricio wrote a 34-page document describing why he wants to leave, blaming volatile club president Bruno de Carvalho for turning Sporting's fans against the team.

"With all due respect for my colleagues who understand that they have the conditions to continue," Patricio wrote, "I understand that I do not have them and that I cannot be required to maintain the contractual relationship.

"I have been subjected to psychological violence and physical violence, which constitutes just cause for me to be free of the contract with Sporting Clube de Portugal."

So far, 23 people have reportedly been remanded in custody following the attack on Sporting's Alcochete training base.

The team finished the 2017/18 season in third after a defeat 2-1 at Maritimo, meaning they have missed out on a place in next season's Champions League qualifiers.

Martin Atkinson is undergoing a 1,700-mile bike ride to the Russia World Cup