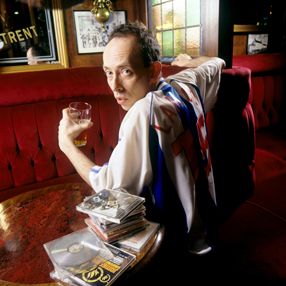 When Colchester United rang up their only celebrity fan with a view to him writing a column in their match programme, the only sticking point was personal terms.

“They said, ‘We haven’t really got any money,’” recalls Radio 1 DJ and tireless new music champion Steve Lamacq. “So I said, ‘OK, fair enough. How about I do six columns for you in return for a home shirt with my name and number on the back’?”

Not strictly in line with industry rates, but Lamacq was only too happy to offer a compromise to the club he’s been a fan of for 25 years. Besides, he fully understands their decidedly shrewd way with money.

“D’you know what our record transfer fee paid is?” he asks, stumping a puzzled FourFourTwo. “£50,000. Paid for Neil Gregory from Ipswich. He only lasted about a season and a half and went to Canvey Island.

"We then paid the same amount for Adrian Coote from Norwich City. He played about 12 games and then went to Wivenhoe Town. So on the rare occasions we have splashed out, it hasn’t exactly paid dividends.”

Nevertheless, Lamacq is proud of his small but perfectly formed team. As well he might be. Despite having the second lowest average gate in League One (only Torquay United get fewer than Colchester’s 3,498), this is the U’s seventh successive season in the division.

They even managed their highest ever league position earlier this season, going top after winning their first three games, before sinking back to a more familiar mid-table position.

And as befits such a modest but homely club, their ‘celebrity fan’ doesn’t regard himself as a celebrity at all. “I’m just a bloke who plays records on the radio,” insists Lamacq.

You may not have seen Steve Lamacq on television that often – he’s not the kind of rent-a-quip you’ll find on Britain’s 100 Favourite Shameless Self-Publicists – but if you’ve had any interest in music beyond the reaches of the Top 40 over the last 10 years, then you’ve doubtless heard his knowledgeable Essex tones on Radio 1’s Evening Session, Lamacq Live and numerous other shows (these days including Radio 1's In New Music We Trust and 6music's Steve Lamacq).

Lamacq has been responsible for the first UK radio exposure for Oasis, Coldplay and pretty much everyone else who’s emerged on the UK alternative music scene in the last 10 years. But that hasn’t stopped him getting down to Layer Road on a regular basis.

"WERE YOU THERE AT RUNCORN?"

A season-ticket holder ever since 1982, 40-year-old Lamacq has been through the mill, including the two seasons the U’s spent in the Conference, culminating in the 1992 non-league double of Conference title and FA Trophy.

“With Colchester fans, there’s always ‘but were you there on that Tuesday night when we played away at Runcorn?’” he grins. “Yet funnily enough we were getting 6,000 a game back then.”

Their paltry attendances this season haven’t exactly been helped by Colchester’s distinctly ropey home form. “We just seem to freeze in front of the home fans. If we’re not a goal up by half-time we just revert to hoofing it hopefully up the field.”And yet, Lamacq has glimpsed an altogether classier kind of football from Colchester this term.

“Under Phil Parkinson we’ve looked a really good side at times. We played some brilliant football against Southampton in the League Cup, and were unlucky to lose [3-2]. It was just a delight to see them play on a big pitch against a side wh�o give you a bit of room. In the previous round we beat West Bromwich Albion, and Craig Fagan’s goal was one of the best I’ve ever seen. A really silky move.

“The only problem in the lower divisions is, sometimes you need a bit of muscle. So we beat West Brom, and then the same side lose at home to Milton Keynes Dons. It just doesn’t make sense.”

"THERE ARE PICTURES ON MY WALLS..."

As is the case with many  lower division clubs, cup giant-killing acts loom large in any account of Colchester United’s historical high points.

“The legend of our 1971 victory over Don Revie’s ‘unbeatable’ Leeds United side always bears down on you, particularly when the FA Cup comes around. It was before my time, but there are pictures of it on my wall at home.

The jubilation on the face of Ray Crawford, and the Leeds players look like a spaceship has appeared in front of their eyes – they can’t believe this is happening. But in recent years we’re the ones who’ve been knocked out by an endless stream of non-league teams. We lost 4-1 to Bedlington Terriers. Four-one! I mean, that’s a proper beating, isn’t it?”

Indeed it is. Yet U’s fans are hoping a new era may yet dawn when they finally get a new stadium built, currently scheduled to open in 2007.

“Yeah, but I doubt the new ground will strike fear into the hearts of opposing fans, because it’s called Cuckoo Farm! You know, going to Old Trafford, or, say, the Stadium of Light makes you feel impressed just at the name. Cuckoo Farm sounds like somewhere out of the Darling Buds Of May...”

Still, the possibilities are endless...

“Laurel and Hardy’s theme was The Cuckoo Waltz, wasn’t it? Maybe we could walk out to the Laurel and Hardy theme! I mean, that might sound ridiculous, but about five seasons ago they were trying out different songs, and for two games only, we ran out to One Step Beyond by Madness. We were all hoping they’d come out onto the pitch doing the Madness walk. But life at Colchester is never quite that perfect...”

From the June 2005 issue of FourFourTwo.