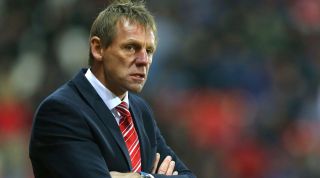 Those devoid of sentiment say you should never go back, but for Stuart Pearce it was an offer he couldn’t refuse.

After a year out of work, and the disappointment of 2013’s dismal Under-21 European Championship far behind him, this was the chance to make amends. More than that, this was Nottingham Forest, the club he’d spent 12 years at as a player through thick and thin despite logic dictating that he probably should have left long before.

It would also allow him a crack at achieving what none of the club’s last 11 permanent managers have done in the last 15 seasons: getting Forest back into the top flight.

Pearce was under no illusions about the scale of his task, but not even he could have expected the almighty struggle that’s ensued. After taking 17 points from the first 21 available, the Reds have won just three of the 20 games since to leave them well out of touch with the play-offs (to the tune of 13 points) in 12th. So how to summarise a difficult campaign so far?

“Frustrating, in a word,” says the Forest chief, speaking exclusively to FourFourTwo. “We started extremely well, pushing the bar of expectation through the roof.

“I think a lot of things are falling into place around us; the academy, the supporters and such, but we just need to galvanise that with results which aren’t good enough at the moment.

“When I was brought here you know full well that it wasn’t a short-term fix; Nottingham Forest have not been in the Premier League for 15 years, and that won’t be solved quickly. We think we’re going in the right direction, but in this profession you have to deliver results.”

SEE ALSO Top 10 returning heroes: The terrace favourites who came back in the dugout

That much is true, not least in the cut-throat Championship – “the Killing Fields,” as Pearce refers to it with little affection – where managerial lives are arguably more endangered than ever.

The former Manchester City boss’s head has long been at risk for results alone, not least when you consider that owner Fawaz Al-Hasawi is already on permanent manager No.5 in just his third season at the City Ground.

Late victory over Derby appears to have relieved some of the pressure, but Pearce knows he’ll be forever fighting against the tide.

“The Championship is one of those leagues where it doesn’t really matter who you are because anyone can beat anyone else on any given day,” shrugs the 52-year-old. “It’s quite incredible.

“Yet expectations are like no other in the country. If you’re in the Premier League, it’s only if you’re in the bottom three that your chairman panics a little bit.

"Here it’s totally different – you might have 18 teams with chairmen and supporters that all think they’re good enough to make it. That in itself brings added pressure to any football club.

“If you look at recent history, Burnley and Leicester have stuck with managers who’ve had a few seasons to build the club and got them promoted. In our division this year 13 teams have changed their manager – that’s over half the league. It’s ridiculous.”

It’s not so much a desperate plea for his job, but a reality check. Clearly the problems this side of the River Trent are more deep rooted than the man in the dugout.

Misfortune has hurt the East Midlands outfit at times this season – see particularly unwelcome injuries to Chris Cohen, Andy Reid and Jack Hobbs at the start of the campaign – but ultimately a lack of goals from anyone other than Britt Assombalonga and Michail Antonio, coupled with a defence leakier than relegation-zoned Wigan, has proved damaging.

Pearce, though, has one thing in his favour: being a bit of a legend around these parts.

“It’s probably helped me,” he admits. “The support that I’ve got from the terraces has been outstanding.

“But I’ve had a connection with this club for many years and they know where my heart lies. They know from my playing days that I’ve not jumped ship and taken big money elsewhere when I possibly could have done, and stayed loyal to the club. They’re repaying some of that now.”

Indeed, 12 years at the City Ground took in two relegations, after the first of which, in 1992/93, Pearce stayed put. Brian Clough, who brought him to Forest from Coventry in 1985, was replaced by Frank Clark, who led the Reds back to the top flight at the first time of asking. Pearce headed the promotion-winning goal at Peterborough.

In 1996/97, his final season at the City Ground, Pearce took up a player-manager role after Clark’s resignation. Famously, he forgot to pick a goalkeeper on his first team-sheet against Arsenal (as pointed out by his wife) before leading the team to a surprise 2-1 win. Twenty two games later he released duties to Dave Bassett, Forest went down and Pearce finally left for Newcastle.

These days it’s Forest’s fans reciprocating the love when times are tough. It’s still there in Pearce’s heart – those post-match celebrations against Derby made it obvious – and for now it’ll do while the chips are down. But is he feeling the strain?

“Some people can feel the weight of media expectation but I’m not overly fussed about that, it doesn’t concern me,” says Pearce. “I was just pleased for the players against Derby because they’ve put in an awful lot of hard work over a number of months and I think on that day they got a result they thoroughly deserved.

“The Championship is so unforgiving with the number of matches you play that you have no time to feel sorry for yourself as a player, coach or manager. When you strip it all down it’s a game of football.”

More of which there are many to play this season, starting with Millwall at home on Saturday. Time for Psycho’s mob to get angry.

Stuart Pearce is backing the Health and Safety Executive asbestos safety campaign, urging all tradespeople to be aware and take sensible measures against the hidden killer. Every job, beware asbestos.