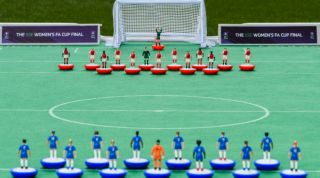 To celebrate the FA Women's Cup final between Arsenal and Chelsea at Wembley on Sunday, two longstanding institutions – the FA and Hasbro – have come together to create a limited edition of the classic finger-flicking table-top game.

Every Arsenal and Chelsea player has been specially hand-crafted, and six substitutes for each team have been included.

The bad news is that this edition can't be bought, and will only be winnable via the FA's social media pages in due course.

Marzena Bogdanowicz, the FA's head of marketing and commercial for women's football, said: "This new, all-female Subbuteo set is a reflection of the rapid growth that women's football is seeing in the UK right now.

"We aspire to greater equality all the way from board games to boardrooms, and every day we are striving to transform the future of the women's game on and off the pitch."

Hasbro senior vice president James Walker added: "We are incredibly excited to work with the FA to place focus on female footballers in this special edition of Subbuteo.

"Subbuteo has a rich heritage that reflects the nation's love of football and this all-female playset is recognition of the vital role that women's football has in our culture."