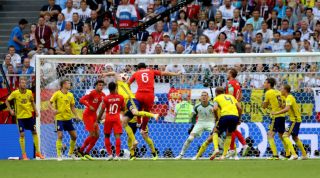 Maybe life was easier when nobody expected anything? As tiring as all of that laboured apathy towards England became, at least its effects weren't paralysing; three days on from the Colombian epic, those frayed nerves weren't ready to be exposed again against Sweden.

A performance full of authority

Fortunately, they never really were. England controlled this quarter-final from almost start to finish and rarely did the Swedish pose any sort of danger.

Given the chaos of Tuesday night, it was also exactly the sort of performance which Gareth Southgate would have wanted to see. Today, England weren't forced to drawn down against their emotional reserves, relying instead on all the qualities which they typically lack when the air gets thin in knockout football. The highlights may have been Harry Maguire's thudding header and the smart combination between Jesse Lingard and Dele Alli, but this was an afternoon which radiated calm and authority - England were almost unsettlingly strong.

Their progress to this point showed many desirable characteristics, not least a refreshing humility and, at last, the ability to conquer a penalty shootout. Nevertheless, their attacking threat in open play had been minimal. Excluding the Panama game and the first fifteen minutes against Tunisia, they'd rarely seen the other side of opponents' defence and real chances had been very few and far between.

It has been an anomaly; England have certainly had the tools to open those kind of spaces, they just haven't done it. Chemistry is an elusive commodity in international football and, presumably, Southgate's selection of an identicial side in four of the five games has been an attempt to foster that necessary cohesion.

It meant the now-familiar back-three comprising John Stones, Harry Maguire and Kyle Walker, but also the now established combination in attack, with Raheem Sterling and Dele Alli again picked to support Harry Kane. The hope, clearly, was to trouble Sweden with more than just well-worked set-pieces and hard-earned penalties.

Given how Janne Andersson's players have performed at this tournament, that might have been optimistic. Barring the 3-0 whipping of Mexico, the Swedes have ground their way through the rounds, playing patiently and slowly, and with a determination to give nothing away on the cheap. The game quickly fell into its expected shape: England's combinations were bright, but quickly perished in the final third. Their first chance of the game, which Kane carved narrowly wide from 20 yards, fell on the counter-attack and during a rare interlude when the Swedes were caught up field.

A concern, but one quickly contextualised by Maguire. From England's first corner of the game, Ashley Young's delivery froze goalkeeper Robin Olsen to his line and Maguire, having barged his marker to the floor, thundered a header into the bottom corner. Steve Holland has certainly earned his money - goal number eight from a set-piece in just five games. When Andersson reviews the match, though, he might wonder how Andreas Granqvist was shed so easily in the build-up and why Emil Forsberg was left contesting for a ball he was never likely to win. A great header, but not a win for zonal marking.

Nevertheless - and style points aside - the game's tone had been dramatically altered. Before half-time, Raheem Sterling had two excellent chances to double the lead. One would draw a tardy offside flag, but the other - a one-on-one after a super Jordan Henderson pass - was squandered tamely. It was pleasing, but not necessarily descriptive. Key to Sweden's preparations would have been a determination not to concede as they did and to make England actually earn a lead. The cheap goal created panic and England really just (almost) took advantage of the growing space.

A footballing gulf existed between these sides

Following the win over Colombia, Southgate had been very quick to dismiss any suggestion that his players were headed for a soft quarter-final. He was also right in his assertion that in the past, England have been guilty of under-estimating the Swedish. History bears that out: Graham Taylor's side were defeated by them in 1992 and England also failed to win either of the two previous World Cup games, drawing 1-1 in 2002 and 2-2 in 2006.

Focus was obviously important, but this game really evidenced the technical gap which now seems to exist between the two countries. In both of those previous draws, Sweden had frustrated a side endowed with househould names, but still one wedded to a functional style of play. Until very recently, the ball was England's enemy at international tournaments, and those previous contests had pitted one functional side against another.

They were games Sweden were equipped for. This, they were less so. England may not have scythed through at will, but they were clearly the more stylish and their avenues of attack - and defensive exit - were much broader. A couple of good chances were still surrendered and Jordan Pickford made three really excellent saves, but they were largely confined to crossing opportunities and the kind of roulette wheel attacking which England used to employ when chasing games.

When Dele Alli doubled the lead, it stressed that evolution. Alli floated into the back-post position he finds so regularly for Tottenham and Lingard's clipped cross found him perfectly. In no sense was it remarkable, but it was still a goal which, you suspect, Sweden could never have scored today.

The caveat remains that Sweden are not France, Belgium or Croatia, and that more talented teams lie ahead. Still, the progress is easy to chart on account of how difficult sides like Sweden used to make life - and how easily they were swatted away this time around.

For England supporters who have suffered the full punch of failure in the past, though, this game was  a tonic. Scoring goals is always important, so too creating chances, but most impressive of all was the manner in which the threat of any comeback was neutralised before it ever appeared. England looked incredibly comfortable at 1-0, even more so at 2-0, and the tone of their performance was surprisingly calm. At no point were clearances thwacked aimlessly upfield and every situation they encountered was met with a footballing solution. They passed the ball accurately and only very rarely were they not in control of the game's rhythm.

Germany have often done that, Brazil, France and Italy too. But England? Not so much.

Today, they may not have played like a future champion, but they certainly showed that they belong in a World Cup semi-final.