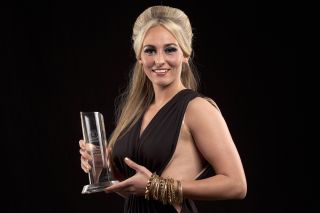 She might be a die-hard Liverpool fan but it’s with city rivals Everton that striker Toni Duggan has made her name. The 21-year-old hotshot has dazzled in the Women’s Super League to earn a place in Hope Powell’s England squad for the European Championship in Sweden – her first major tournament.

Toni, it’s been quite a year for you hasn’t it?
It’s been a massive year but to be honest I still haven’t had chance to look back. People talk to me about winning the Under-23 Player of the Year award but I’ve already forgotten all about it! Things just seem to be passing me by but I wouldn’t have it any other way. At the start of the year you set out to be a part of every tournament and every squad, and you want to be up for these individual awards. It’s an honour. I was up for the PFA Player of the Year and won the Everton award, so yes, it’s been quite an amazing year. Hopefully we can top that now.

Now you’ve had a taste of the big time has it increased the pressure on you?
I wouldn’t say there’s more pressure now but obviously when people are looking out for you, you’re expected to perform. But I expect that from myself anyway – if I have a bad game I’m furious, whether it be in training or a game. The added pressure is probably there but I put so much on myself anyway.

Important question – are you a Red or a Blue?
I’m a Red! But slowly swaying towards the blue half now. It’s quite mad. If you’d asked me this when I was eight or nine I’d have said no way! But something changed and Everton gave me that opportunity. Just being around the club [is great], going to training every day with the staff and seeing the men’s players on occasions. Nowadays I want to see Everton do well too. All my family are Liverpool fans, so if I’m sitting there wanting the other half to win it’d be awful!

Have you had a bit of stick for that?
They still ask me who I support now and I can never really answer it! I still like Liverpool and always will but Everton have played a massive part in my life. As the years go by I’m growing to like them even more – I’m half and half at the minute.

You made your England debut in September last year – how did that feel?
It was amazing. I was involved from the under-15s but that was only training – I wasn’t even aware there was a development team then. My mum had to explain the process to me! I made my debut for the under-17s but I can’t really say it was a dream come true because I’d never thought about playing for England. I just loved football and wanted to play. But as that developed I wanted to be involved with the seniors and thankfully that has happened now.

How have you found the step up?
I wouldn’ t say there’s been a gap to bridge because I’ve come up through the youth ranks and played against world-class players in my age group. You know what to expect because those countries have a similar style of play. Obviously senior level is totally different because it is a lot quicker and the calibre of player you are against is higher. But you have to give yourself respect and think you are just as good as them. You are only going to improve by playing against those players – I’m just thankful I have that opportunity.

The WSL has taken a break while the European Championship takes place - will that help for momentum or might tiredness creep in?
I think it can only be good for us. The girls should be fit, sharp and there shouldn’t be any excuses. I can only speak from the youth system but those tournaments were always in July when we played in the winter league, and we were coming in off the back of a long season. It was difficult. A few players, including myself, experienced burnout but this time that’s not the case.

What was the moment like when you got that call-up?
I was absolutely buzzing! We had a short break after the season with Everton came to a close before the squad met up. I was in Portugal when Hope called me up, I was delighted. Being on that plane was my goal at the start of the season.

So, what are England’s chances like?
The strength of the squad is probably the best it’s ever been. It has an amazing blend of youth and experience, and if we can find the right blend we can do well. The girls did well getting to the final in 2009 and that will be good experience. Now we want to take it to the next level and win it. I think that defeat will have made them want it even more.

Who are the biggest threats in the tournament?
I’d have to say Germany – they are a quality side and won the last tournament in 2009. Sweden, the host nation, will have all the support behind them so they will be up for it too. But any team going into a European Championship will be as prepared as possible and we know it’s going to be tough. But we have done our preparation and as long as we stick to that we can do well.

Germany have won the last four tournaments – could you take them on again and win this time?
Definitely. You can’t go into a tournament with the attitude of wanting to avoid a team. If you want to be the best you’ve got to beat the best. If we don’t believe in ourselves then we’re not giving ourselves the best chance. The rest of the girls are confident that we are just as good and on our day we can beat anyone.

What about if you hit that late winner in the final?
Wow – I’ve only thought about playing let alone scoring! You can’t even explain how good that would be.

Do you have any personal targets from the tournament?
I’m a part of the squad now so I don’t just want to be a player who’s making up the numbers. I want to be in the starting XI making an impact. Hope has a tough decision. My attitude will just be to help the team as much as I can. All I know is that I’ll be giving it my all in every training session.

How much has women’s football changed in the short space of time you’ve been involved?
I can definitely see that it’s still going through a transition now. We are all striving to be at the top of our game and hopefully be professionals one day. I don’t think you can ever compare it to the men’s game because that’s on another level. The changes have been amazing though, even just going into schools doing coaching and seeing how many kids want to participate. When I was growing up I was the only girl who wanted to play! Now there’s 20 from one class. I’m honoured to be a part of it.

How can young girls be kept interested in pursuing football seriously?
There is a drop-off but I think that’s the same for boys too between the ages of 15 and 18. The numbers are massive. I know it was tough for me at that age because my mates were going out and doing other things. But you have to make the right decisions. There are girls who will go down the other route and choose partying though and I think that’s a massive thing. If you really want it you have to be focused and determined.

Back to the WSL, how have you found the season so far?
I’m not going to lie, seeing Liverpool above us is hard to take and I'm gutted about it. But there is time to change. We have a young squad at Everton and there’s room for improvement. With a young squad comes inconsistency and I think that’s what we saw in the first half of the season unfortunately. I’m confident in the talent we have that we can progress though. I’m not jealous of Liverpool because their success is good for the league and it can change the profile of the game again. Long may that continue and hopefully other teams can improve too. Hopefully we can turn the tables though.

What do Everton need to do in the second half to turn it around?
We got a good result against Chelsea [before the break] - I think it was a massive turning point and shows how far we’ve come as a team. Before that we didn’t really know what team would turn up, we struggled. But on that day we were brilliant and the break probably came at the wrong time for us.