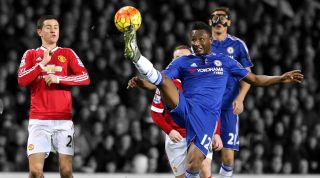 Guus Hiddink didn't need much prompting. Simply asked what he had made of one of his player's displays following Chelsea’s impressive 3-0 defeat of Crystal Palace on Sunday afternoon, the Dutchman gave a lengthy answer, lavishing praise on an “elegant”, “beautiful” and “smooth” operator who was widely considered to be the Blues’ best performer on the day.

Such adjectives have been employed to describe the likes of Oscar, Willian and Eden Hazard in the past, but this time Hiddink wasn't discussing any member of that attacking trio. John Obi Mikel, the largely understated and often-maligned midfield anchor, was the subject of his eulogy.

“He played very well, as he also did in the previous games,” the Dutchman opined. “He's the ideal player in my option to bring balance to the team. He can recover the radar. He knows the game very well. He knows where the strength of the opponent is and he knows exactly how to cope with that. He has a very good eye, a very good nose and a very good sense of where to recover.

“He doesn't do it in a very brutal way – he's very, very elegant. What I like to see very much is not just a quality player but a player who can defend so smoothly. It's beautiful to see. He doesn't lose many balls, he's good at short passing. I don't expect and I don't ask him to make the decisive final pass. He can but no, we let the other players do that.”

Mikel completed the full game at Selhurst Park, just as he did in Chelsea’s 0-0 draw with Manchester United six days previously. He has now played 225 minutes in Hiddink’s three games in charge, more than he managed under Jose Mourinho (193) in the first 15 Premier League fixtures of the campaign.

Chelsea’s forgotten man could be one of the key figures in what everyone connected with the club is hoping will be a resurgent second half of the season.

Mikel has had a strange career at Stamford Bridge. Now in his 10th year at Chelsea – it will be interesting to see whether or not the 28-year-old takes up the opportunity for a testimonial this summer – he has won 10 major trophies and worked under eight different managers.

Mikel, though, hasn't always been central to Chelsea’s accomplishments; a mainstay who has often found himself on the periphery. Yet he's still going strong in west London despite persistent rumours that have linked him away in recent transfer windows, only one of two players – along with captain John Terry – who was present for both of Mourinho’s exits in 2007 and 2015. With Didier Drogba and Petr Cech departing last summer, Mikel’s status as a long-serving pillar of the club has grown further, even if his contributions on the pitch have only just begun to pick up again.

It’s interesting to note that the only season in which Mikel has made over 30 appearances in the Premier League was 2008/09, the year of Hiddink’s first spell as interim manager. The Nigeria international was given 15 starts in all competitions by the former Real Madrid boss, who led the Blues to a top-four finish and added another FA Cup to the Stamford Bridge trophy cabinet.

With Hiddink making the promotion of Mikel one of his first acts since rejoining last month – indeed, his return is the only real personnel change Hiddink has instigated – it’s again becoming clear how highly the veteran coach rates him.

Although he’s been deployed as a No.10 at times for Nigeria, Mikel’s contributions at Chelsea have always been based defensively. He was excellent in the holding midfield role against Palace on Sunday, maintaining a disciplined position in front of the back four and breaking up the hosts’ attacks before they reached the danger zone. He was successful with three of his four attempted tackles and made one interception and one block, while his ability to simply stand in the right place also helped to bring an end to many of Palace’s forward forays.

One of Mikel’s biggest qualities is that he knows his own limitations; as Hiddink alluded to, he is unlikely to play a defence-splitting through ball but, aware of his strengths and weaknesses, rarely risks giving possession away by attempting one.

Instead, he chooses to keep things simple, recycling the ball to his more gifted team-mates with minimum fuss. Of his 82 attempted passes, 78 were completed at Selhurst Park, and the former Lyn Oslo man played an influential role in Chelsea controlling what had looked like a tricky encounter on paper.

It was also notable that Mikel’s presence in the side seemed to reinvigorate Cesc Fabregas, who ran a game from midfield for the first time in a long while. The Spaniard has struggled this term and looked a shadow of the player who was arguably the best in the Premier League before Christmas 2014, but the reassuring figure of a solid and steady anchorman behind him afforded Fabregas the freedom to concentrate on his attacking exploits at the weekend.

Although Nemanja Matic was imperious in that role last season, he has been one of many Chelsea players to have experienced a major dip in form this time around.

In hindsight, the writing may have been on the wall for the Serb – in the short-term at least – when Hiddink included him in a list of his “creative midfielders” in the press conference that followed the champions’ 2-2 draw with Watford on Boxing Day, a game in which Mikel replaced Matic at half-time.

The former’s fine showings over the festive period mean the holding midfield position is now his to lose. The comprehensive triumph at Palace has led to some tentative suggestions that Chelsea could still finish in the top four; and while that remains highly unlikely, a Europa League spot is definitely attainable and the Blues’ presence in the FA Cup and Champions League means there is still plenty to play for between now and May.

He may be one of the more unfashionable players on the Blues' books, but Mikel could be the unlikely catalyst as Chelsea attempts to restore a little prestige to their reputation in the coming months.