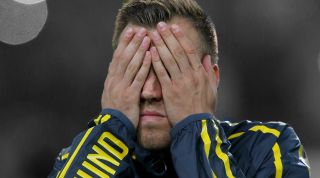 English football's first £1m signing Trevor Francis scored the winning goal in the 1979 European Cup Final for Nottingham Forest, but the first teenage seven-figure signing made much less of an impact at his new club.

Clive Allen was 19 when Arsenal boss Terry Neill spent £1.25m to sign him from QPR in the summer of 1980. He'd scored 32 goals in 49 appearances for Rangers, but after none in three pre-season games for his new club the young striker was moved on to Crystal Palace in a swap deal with Kenny Sansom and Paul Barron.

There were suggestions that the Gunners had wanted Sansom all along, and this had been their plan to get him, but Allen wasn't convinced. "Several different theories were put forward," he said. "There was no foundation to any of them. I mean, if Arsenal wanted Kenny, why didn't they just buy him from Palace?"

Stephane Guivarc'h shot to fame as the striker who somehow couldn't score in the France team that was busy winning the 1998 World Cup.

Those were presumably the credentials that Newcastle thought would be perfect for them when they signed Guivarc'h shortly before the tournament from Auxerre. Perhaps they hoped the frontman and his knack of failing to score would turn the rest of the Newcastle team into Zidane, Djorkaeff and Henry.

Unfortunately, though, it didn't quite work out that way. He did net on his debut against Liverpool but made only four appearances before Ruud Gullit, in as manager for Kenny Dalglish, sold him to Rangers for £3.5m.

He was later named as one of the Premier League's worst ever strikers in a national newspaper survey, to which Guivarc'h later retorted: "This survey, I don't give a damn about it. It was done just to tease and mock me. What a story - a truly pointless stunt. But let's get to the point. The English. What have they won since the World Cup in 1966?" Charming.

Portuguese forward Bebe was happy enough when Europa League regulars Vitoria Guimaraes signed him on a free transfer from cash-strapped Estrela da Amadora in 2010. So he presumably couldn't believe his luck a few weeks later when, before he'd even played a game for Vitoria, Manchester United made their move... for £7.4m. Bebe certainly must have been something special in pre-season – so much so that Vitoria had swiftly increased his previous buyout clause of €3m.

But that form swiftly evaporated and he made only seven appearances for United, spending time on loan at Besiktas, Rio Ave and Paços de Ferreira before joining the former permanently in July 2014. After playing once for the Eagles he was shipped off on loan again to Cordoba, then Rayo Vallecano for the 2015/16 campaign. Perhaps he just doesn't like the cold.

Sol Campbell spent longer as a potential candidate to be London Mayor than he did as a Notts County player.

Amid talk of a Middle East takeover and ambitions to reach the Premier League, the League Two club appointed Sven-Goran Eriksson as director of football and then lured Campbell to Meadow Lane on a five-year deal in 2009 after the defender had left Portsmouth.

Despite dropping down three divisions, Campbell had a nightmare debut in a defeat at Morecambe and left Notts County days later after becoming increasingly concerned that the club might not have the bright future they believed. "Sven still hasn’t said sorry for getting me involved," Campbell told FFT last year.

The notoriously hard-to-handle Kevin-Prince Boateng spent so little time at Genoa that he didn't even have the opportunity to fall out with anyone. The Serie A side paid Portsmouth £5m for the midfielder in August 2010, only to immediately ship him out to Milan on loan with a view to a permanent deal.

"Genoa were following Boateng before the 2010 World Cup in South Africa," said club president Enrico Preziosi. "Milan have an unusual situation, as they have many players in the last year of their contracts and are keeping an eye on the balance sheet.

"Instead we had more of an opportunity to move for Boateng. For now he is joining the Rossoneri on loan. If Milan buy him outright then it'll mean we both saw this is a great player and Genoa will have made a healthy profit. Will he return to Genoa? He could do, but in a way I hope he doesn't."

Well, there's nothing like making your new signing feel wanted. And no, he never did return.

In 2013, Stoke agreed a pre-contract deal to sign Juan Agudelo when the United States international's contract at New England Revolution expired. This all seemed fine, until Agudelo failed to secure a work permit. Maybe that might have been a bit of a warning sign, but Stoke decided to sign him anyway and send him out on loan until the forward qualified for a permit.

So Agudelo joined Eredivisie side Utrecht for the second half of the 2013/14 season, but three goals in 14 appearances later he re-applied for his work permit – and the Home Office still said no. Stoke swiftly terminated the youngster's contract and he went full circle with a return to New England Revolution.

Three clubs who so often go together: Real Betis, Real Madrid and... er, Coventry City? In the summer of 1998, Robert Jarni was faced with a dilemma. Weeks after helping Croatia to third place at the World Cup, Gordon Strachan had lured Jarni to Highfield Road for £2.6m from Betis when Real Madrid suddenly decided they wanted to buy the left-wing-back.

It is, of course, impossible to know which of those two clubs to choose. Jarni thought long and hard about it... and then joined Real Madrid for £3.4m.

"I wouldn't say it was my wife's decision," said Jarni, while intimating that it was his wife's decision. "It was a family decision – my family was against moving to England. We had small children, my daughter was in elementary school in Spain and we preferred to stay there rather than move to England. I was honest about it, and when I told Strachan, he understood."

Steed Malbranque made the decision to return to France after 10 years in English football when he signed for Saint-Etienne from Sunderland in 2011. Only a month later, though, it was reported that Malbranque had asked to be released from his contract to look after his son, who was apparently battling cancer.

But it turned out that his son wasn't battling cancer. In fact, he didn't even have a son. "Steed does not know the origin of these stories but would like to stress that they are without merit," read a statement released on his behalf. "His immediate family are all in good health." Whatever the mysterious reason, Malbranque left anyway, spending a year out of the game before rejoining his former club Lyon in 2012.

"I am pleased to get the chance to play for one of the biggest clubs in the world," said an 18-year-old John Obi Mikel in 2006. "I'm looking forward to it."

The only problem was, that club was Manchester United, and Chelsea also believed they had agreed a deal. United's announcement of Mikel's signing from Norwegian club Lyn Oslo – complete with pictures of the Nigerian holding up the shirt – proved premature as a legal wrangle ensued. As United fans became angered by a deal that was slipping away from the club, Mikel was assigned a security guard and moved to a safe hotel amid claims he'd been subjected to threatening phone calls. Mikel also briefly went missing, sparking widespread media coverage. In the end Chelsea came to an agreement with United and Lyn, and Mikel moved to Stamford Bridge. They paid the price, though: £12m to United in two instalments, and £4m to Lyn.

If there's one thing that the former Watford and Fulham midfielder Hameur Bouazza has learned (eventually) over the past few years, it's that south-east Europe is not for him.

Bouazza has transferred to the region not once but twice, but was on the plane back to England quicker than some of the summer tourists. The Algerian joined Turkish club Sivasspor in 2009 but his debut ended with a 3-0 Europa League defeat to Shakhtar Donetsk. Within five days of arriving he was off, released from his contract after saying he didn't like the city.

Bouazza went back to England with Blackpool and Millwall before moving to Cyprus with Omonia Nicosia. To his credit, this time he lasted a whole two months, although unfortunately for Omonia he was on his way again when the football season started. "I leave Omonia Nicosia amicably with the assurance that the club will not trouble me," said Bouazza. How nice of them. These days he can be found in France's third tier.