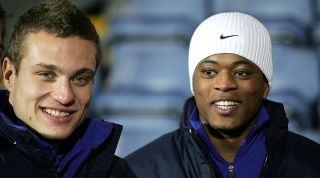 Many loan additions are supposed to be temporary stop-gaps to ease an injury crisis or boost a squad low on morale, but Arteta’s move to Everton from Real Sociedad in January 2005 always felt like one made with the long-term in mind.

The Spanish schemer, who instantly became integral as the Toffees finished in the top four, inked a five-year contract at Goodison Park in the summer after Everton made his temporary deal permanent for just £2m. Arteta was named player of the year in his first full campaign at the club, and was generally excellent right up until his departure for Arsenal in 2011.

Many would attest – and with some justification – that Adebayor has been more trouble than he’s worth down the years. But it surely can't be denied that he was also a terrific footballer.

While things eventually turned sour at Arsenal, the Togo international was excellent once he’d settled in north London following his £3m switch from Monaco in 2006. Twenty-four goals in 36 Premier League games in 2007/08 helped the Gunners sustain a title challenge for almost the entire campaign, while his sale to Manchester City three years after arriving pumped a cool £25m into the club’s coffers.

City fans will tell you it was worth every penny for that celebration.

After tough starts, both turned out to be fantastic value for money: the duo turned out for a combined 679 United appearances, winning five Premier Leagues, three League Cups and the Champions League before their respective exits to Juventus and Inter in 2014. Not bad at all, Fergie.

Samba’s move to QPR in January 2013 didn’t turn out too well, but the £400,000 deal that took him to Blackburn as a 22-year-old was a steal. The no-nonsense centre-back first arrived at Ewood Park in 2007 and soon established himself as a mainstay at the heart of Mark Hughes’ backline alongside Ryan Nelsen.

Samba played at least 30 Premier League games in each of his four full seasons at the club before hooking up with Samuel Eto’o and Roberto Carlos at Anzhi Makhachkala in 2012 (who then signed him again in summer 2013, for the same £12m QPR had paid for his services a few months earlier).

Zaha's deeply unhappy time at Manchester United culminated in only two Premier League appearances for a team adjusting badly to post-Fergie life. As he later recalled to Shortlist in 2018: “I was dealing with it at 19; living in Manchester by myself, nowhere near anyone else, because the club had a hold over where I lived. They hadn’t given me a car, like every other player. Nothing. I’m living in this hell by myself, away from my family, and I thought: ‘If this doesn’t make me stronger, what will?’”

But the south Londoner found a happy home back at Palace. After initially rejoining the Eagles on loan at the start of 2014/15, Zaha's return was rubber-stamped for a snip at £6m in January 2014. Suffice to say he's made a mockery of such a price tag since.

Martin O’Neill may have been pushing it ever so slightly when he claimed that Young was in the same bracket as Lionel Messi and Cristiano Ronaldo in December 2008, but Aston Villa had certainly got themselves a good deal when they secured his services for an initial £8m almost two years previously.

The former Watford winger spent four years at Villa Park before moving to Manchester United for £16m in 2011, landing the Midlanders a tidy profit.

There was a time when Hangeland was considered one of the best centre-halves in England and regularly linked with Chelsea and Manchester United.

The deal that first brought him to the Premier League was one of Fulham’s best bargains. Captured for just £2.5m from Copenhagen in 2008 by Roy Hodgson, who'd bossed the towering Norwegian at Viking, Hangeland made 271 appearances over a six-year spell and played a big part in the Cottagers' remarkable run to the 2010 Europa League Final. And then came Felix Magath with his cheese...

A hefty fee, sure, but who could argue that Suarez wasn’t worth every penny? The acquisition of Andy Carroll for £35m a few hours later somewhat overshadowed the former’s transfer from Ajax, but it soon became apparent that Suarez was the star striker in the making.

Eighty-two goals were plundered in 133 appearances for the Reds, 31 of which came in a remarkable 2013/14 when the brilliant Uruguayan almost carried Liverpool to a first league title in 24 years. More easily forgotten is that he missed the first five games of the season for biting Branislav Ivanovic, the latter pair of which Liverpool dropped five points against Swansea and Southampton. What if...

“I’m happy with everything I've seen here. I spoke with Robert Pires, Patrick Vieira, Laurent Blanc and Fabien Barthez and they told me to sign as quickly as possible,” Dugarry said shortly after jotting on the dotted line from Bordeaux in January 2003.

Birmingham manager Steve Bruce labelled the initial loan signing as the biggest in the club’s history – and it paid off, too. The Frenchman scored five goals in 16 games as the Blues pulled away from the drop zone. The 1998 World Cup winner later joined on a permanent basis but scored only one more goal for Birmingham before hanging up his boots in 2005. Still, worth it while it lasted.

The signing of Bolton centre-back Cahill in January 2012 was far from the most glamorous in Chelsea’s recent history, but it was one of Roman Abramovich’s better investments.

The £7m man was key in the Blues’ unlikely Champions League triumph that year and missed only two games as Jose Mourinho’s men won the Premier League at a canter in 2014/15. He's no longer an important figure under new manager Maurizio Sarri, but Chelsea have long got their money's worth from the English stopper.

Alli has been a revelation since making his Premier League debut in August 2015, but he actually became a Tottenham player back in the winter window when MK Dons accepted the north Londoners’ £5m bid for his services.

After being loaned back to his boyhood club for the remainder of the 2014/15 campaign, the young midfielder instantly became an essential part of a title-challenging side at White Hart Lane and has posted terrific goal outputs in every season since. A true gem.

MLS was still viewed with suspicion in 2007, so expectations were reserved when Fulham shelled out a couple of million for New England Revolution star Dempsey. Turns out they needn't have been, though: 'Deuce' turned out to be a terrific piece of business for the Cottagers, thumping 60 goals in 225 appearances across his first spell with the club.

None of those was more memorable than his stunning chip in the Europa League against Juventus which helped Fulham on their way to the final in 2010, earning him a place in club folklore forever.

Leicester took advantage of a ludicrously low release clause in Gray's contract in January 2016 which allowed them to snap up one of the Championship's brightest young players for just £3.75m.

The England U21 star had to be patient for his opportunities at the King Power Stadium, but eventually found first-team starts far more forthcoming under Claude Puel after frustration under Claudio Ranieri and Craig Shakespeare. His career hasn't quite kicked on as expected in the East Midlands, but even if Leicester were to sell this summer they would still turn a handsome profit on the young wideman.