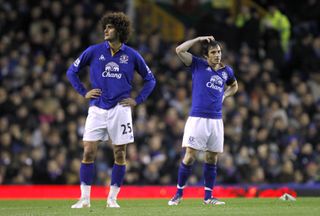 Having heard a £28 million joint bid for Marouane Fellaini and Leighton Baines described as “derisory and insulting”, Manchester United are planning a new raid on the Everton pair by submitting a derisory bid for Belgian midfielder Fellaini, and an insulting one for England full-back Baines.

Everton were angered by United’s attempt to procure their two star players, considering the figure to be a gross undervaluation of the pair’s combined worth.

Mindful of this, United are said to be preparing a new bid that will instead be a gross undervaluation of their individual worth.

“A £16m bid for Fellaini is clearly derisory, and the first letter of every line spells out the hidden insult ‘GOODISON SMELLS OF WEE’.

“The £12m bid for Baines, itself quite insulting, was prepared on special red notepaper listing the 29 trophies Manchester United have won since Everton won a derisory FA Cup eighteen years ago.”

"Here Leighton, can you smell something funny around here?"

Premier League experts agree that if United continue to insult and deride the Toffees it is only a matter of time before they land both players at a knock-down price.

“It’s a clever strategy by Moyes to antagonise Everton to the point where they’ll be desperate to co-operate,” a league insider told FourFourTwo.com.

“Manchester United probably just need to fling over a few more insults to seal the deal. I expect Moyes has the Neville brothers working on some zingers as we speak.”

Should the new bids fail, Moyes is planning a final offer of £2m for Fellaini and a bag of pork scratchings for Baines. It is rumoured chairman Bill Kenwright is a keen fan of the latter and could be persuaded to relinquish his star men for such an offer.