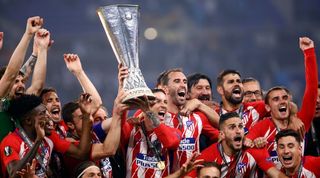 The chant of “Thursday night, Channel 5” first entered the Premier League lexicon in the early 2000s as a popular riposte among fans dining at the top table of Champions League football.

Traditionally used as a stick with which to beat under-achievers like Tottenham and Manchester City, the phenomenon peaked in 2011 when the ever-popular Ashley Cole used it to taunt Roberto Mancini and his players following a 2-1 win over the Citizens.

A lot has changed since then. Spurs and City are now firmly ensconced in the Premier League’s elite, Cole is no longer a public concern, Channel 5 has swapped live football coverage for debates about Britain’s best crisps and the Europa League is positively thriving.

With the carrot of a place in the ever-lucrative Champions League now up for grabs alongside one of football’s most iconic and eye-catching trophies, the Europa League finally means big business. More importantly, it’s increasingly the more unpredictable and entertaining European competition.

But there's a sneaking suspicion that's always been the case.

On a basic level, the Europa League outstrips the Champions League for the fact there is more football on offer – 205 games compared to a paltry 125, to be precise – but it goes beyond that.

There have been 521 goals in 192 matches in this season’s Europa League, averaging at close to three a game – or one every 32 minutes. There’s been plenty of late drama too, with 105 of those 521 goals coming in the final 14 minutes of games this term. Take Chelsea's opponents this week as a case in point: Slavia Prague – after a 2-2 first-leg draw with Sevilla in the last 16 – won the second leg 4-3 in extra-time with a goal in the 119th minute which saved them from an away goals exit.

This year is no different, with Eintracht Frankfurt and Slavia Prague reaching the quarter-finals. Ostersund and Viktoria Plzen qualified for the knockout phase in 2018, while Red Bull Salzburg made it all the way to the semi-finals.

A more diverse and inclusive competition, teams from 16 different nations have reached the Europa League or UEFA Cup final since its inception compared with 13 in the European Cup or Champions League.

This eclectic mix of club sides means a wider variety of ties compared with the Champions League, giving travelling fans a chance to experience some of Europe’s more unique away days alongside trips to some of the continent’s traditional giants.

The Europa League’s lesser lights aren’t just there to make up the numbers either – this season, the fantastically-named F91 Dudelange, a semi-professional side from Luxembourg, picked up a historic draw with Real Betis. With a knack for championing the underdog while offering up goals and upsets, the Europa League often has the feel of a continental FA Cup.

It’s also the perfect place to scout future talent: Sergio Aguero, Willian, Radamel Falcao, Samuel Umtiti and Nemanja Matic all cut their teeth in the Europa League, while Jose Mourinho wouldn’t be where he is today had he not won the competition with Porto in 2003. That last one is a positive, honest.

The fact of the matter is that, for all our mockery, the Premier League has always enjoyed a healthy and loving relationship with the Europa League. It’s just sometimes we need reminding why we fell in love with it in the first place.

Think of Norwich City’s win over Bayern Munich (then the UEFA Cup), Clint Dempsey’s one-man demolition of Juventus for Fulham, or Middlesbrough’s bonkers run to the 2006 final. Liverpool fans might cite that night in Istanbul as their greatest European night, but the madcap 5-4 win over Alaves in the 2001 UEFA Cup Final was more entertaining than any of them.

The good news for the Europa League is that it’s no longer the preserve of the Premier League’s lesser lights either. Four different ‘top six’ sides have made the semi-finals or better since 2013, with Chelsea and Manchester United among the recent winners.

It's the perfect excuse for a Thursday night meet-up with friends or a long weekend spent exploring some far-flung European locale. It might not suit the Premier League calendar, but the Europa League is the perfect antidote to a busy working week and a fine segue into the weekend’s football. Long may it continue.