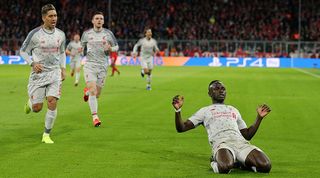 Porto have the toughest battle on paper, and now face one of the favourites in the competition after scraping past Roma on the right side of controversy. Their quarter-final opponents, Liverpool, absolutely blitzed them at the same stage last season: 5-0 on aggregate, with all the goals coming in a cakewalk first leg.

That match was a counter-pressing masterclass from Jurgen Klopp’s men, and Porto simply couldn’t cope with their lack of space and Liverpool’s width. The Primeira Liga title-chasers are solid defensively this year, though, and head coach Sergio Conceicao may opt to shift his Real Madrid-bound centre-back Eder Militao to right-back, in order to deal with overloads.

That would allow him to keep his experienced pair of Pepe and Felipe in the middle – although they do catch a break not having to play against the suspended Andrew Robertson in the first leg. The odds are stacked against them, regardless of the tactical changes.

Tottenham are not the seventh-best team left – they’re above that. But their upcoming hurdle against Manchester City is among the toughest to leap.

What they have going for them now, however, is a relatively healthy squad. After beating Borussia Dortmund convincingly without key players in both legs, Spurs now have everyone available apart from Eric Dier, who is still recovering from a muscular injury.

Mauricio Pochettino’s men play Manchester City thrice in the span of 11 days: twice in the Champions League, and once in the league. Both teams are in the thick of each competition, and will have the challenges of rotation, tactical tinkering and keeping their best players fresh for a season-defining stretch. City have more depth to deal with it.

Since a mini-slump earlier this season, which had most pundits seeing Ajax as huge underdogs against (even this version of) Real Madrid, Erik ten Hag’s men have turned a corner. They dominated Madrid over two legs, flattering them with a 6-2 aggregate scoreline. They’ve won all their games since then bar one uncharacteristic loss to AZ Alkmaar, keeping the pressure on Feyenoord in the Eredivisie title race.

Ajax won’t let Juventus breathe as much as Atletico Madrid did in the second leg of their disastrous last-16 tie. But while Massimiliano Allegri’s men won’t have as much comfort building from the back – the Dutch side are good at providing coverage on the flanks to prevent crosses – Matthijs de Ligt and Daley Blind face one of the most unenviable tasks in European football by having to deal with Mario Mandzukic and Cristiano Ronaldo in the box.

This is perhaps generous. United barely pulled through against PSG, and now have a gigantic task against Barcelona. Ole Gunnar Solskjaer’s men haven’t played well of late, and are going against a team that seemingly can’t lose – one with the unstoppable Lionel Messi and in-form Luis Suarez.

Fred will get annihilated if Solskjaer plays him as the team’s anchor, given how poorly he usually does when pressed deep. United will have counter-attacking opportunities, but must take the few chances they get.

Barcelona are good defensively in transition, and the margin of error against them is virtually zero. But United proved in Paris that they can be clinical from limited opportunities, and with their backs against the wall. It’s a glimmer of hope.

Really, the top four are interchangeable in this list. Any team with Messi or Ronaldo will always have a chance to win a title, even if surrounding players underperform. Barça’s challenge against Manchester United may be relatively comfortable, but it’s the tests beyond that could stifle them.

No team has properly punished Barcelona for their mistakes in any season-threatening way. Ernesto Valverde’s men have steamrolled La Liga, and have dealt with their biggest Champions League tests. Real Madrid and Atletico Madrid have been unable to punish them for their gifts when pressed deep, or the space left behind their full-backs.

Recently, Villarreal were up two goals against a Barcelona side full of defensive holes – but they couldn’t hold on. Manchester City, Liverpool or Juventus won’t be as merciful.

This is the stage where watching Juventus becomes really interesting. They’ve laughed away at yet another league title, and Allegri pulled off a remarkable gameplan to come back against Atletico Madrid in the last-16 second leg.

You can’t sleep against a talented Ajax side, but Juve have a tight defence structure, behemoths up front, and big-time players who thrive in the Champions League. They should be able to iron out any kinks from poor domestic form when it comes to nights like this.

But maybe that’s optimistic. They struggled against Atletico in the first leg when faced with waves of pressure. Ajax have proved that they can sustain that energy over the course of two legs (where Atleti couldn’t), and won’t be afraid to go at Juve away from home. It’ll be a pulsating tie.

Liverpool were already among the favourites for this competition. Now they have the easiest draw of the round, and can get Robertson’s suspension out of the way early.

While there were concerns about the Reds not long ago, and they didn’t look that impressive against Bayern Munich over two legs, they’re starting to peak at the right time. Sadio Mané is absolutely lethal in current form, and the entire team is rallying around him. They are ready.

It’s not that City don’t have a tough opponent to leapfrog this round – they do. Tottenham could feasibly beat anyone over two legs.

But when you’re the best, you’re the best. And right now, Manchester City are equipped to go deeper than anyone given their talent pool, deep squad and flexible systems.

Tottenham should offer a stern enough test, but City should progress and cement their status as favourites. That impending Liverpool-City tie, if it arrives again for the second season running, will be juicy indeed. Pep Guardiola must conquer his kryptonite that is Jurgen Klopp.

QUIZ! Can you name the 50 highest Premier League scorers of all time?

HAPLESS The 11 worst misses in football