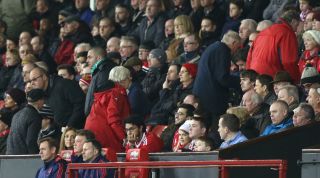 For the second home league game in a row, Louis van Gaal opted to use three in defence, as Manchester United lined-up in a 3-4-1-2. The Dutchman selected full-back Matteo Darmain on right side of the trio, with Jesse Lingard and youngster Cameron Borthwick-Jackson operating as wing-backs.

It was probably a response to his opposite number and fellow Dutchman Ronald Koeman using a 3-4-2-1 for his Southampton side, although with Shane Long leading the line on his own it perhaps would have been more beneficial to remain with a back four. However, this did allow United to use Anthony Martial and Wayne Rooney as a partnership up front without conceding a man advantage in midfield.

“The important thing is when you change the system that you have the players to play in that system and we have,” admitted Koeman in the post-match press conference. It was a game for defenders, with the flair players failing to ignite proceedings.

The booing and jeers rung out around Old Trafford, as the whistle for the interval was blown and then later at the end. There had been just one shot on target in the opening 45 minutes, which was a fairly tame effort straight at Fraser Forster from Daley Blind in the 13th minute. If any home fans thought their team couldn’t do any worse after the break, they were wrong: it proved to be United’s only accurate shot of the entire game.

Van Gaal had stated in the match-day programme that his team needed to take their chances, but it would be extremely generous to describe a centre-back’s attempt from distance as a genuine goalscoring opportunity. United were slow and laboured in possession during the first half, which won’t have been helped by their manager’s reactive tactics.

No one should have been shocked, as the Red Devils have now scored just one first-half goal in their last 10 home league matches. The 11 league games at Old Trafford this season have produced just three first-half goals – fewer than any other stadium – and astonishingly only one of those came from a United player, as Memphis Depay finished versus Sunderland.

Juan Mata replaced Maroune Fellaini for the second half, much to the delight of the home supporters, but it did nothing to increase the number of shots on target – or goals.

After missing out on Pedro last summer, United were heavily linked with Sadio Mane. The attacker had been signed by the South Coast club from Red Bull Salzburg just a year before, and it was believed that Van Gaal’s club could prise him away for around £15 million.

However, on this showing Ed Woodward and his team of negotiators will have been pleased that they left their chequebooks pocketed on this occasion. The Senegal international played in the hole behind Long, but was unable to influence the game either as a No.10 or when he moved alongside Long in the latter stages.

His one chance came in the first half, as he played a one-two with Dusan Tadic, but unfortunately his first touch let him down as he ran through on goal. Mane will have to show more consistency and prove that he belongs in the biggest venues, if he is to be considered for a big-money move in the near future.

Van Dijk the latest Saints stopper to step up

As a former central defender himself, Koeman clearly knows how to get the best out of his backline and Virgil van Dijk was outstanding against Rooney and Martial. Dejan Lovren and Toby Alderweireld both secured moves to traditional top-six sides after their solo campaigns at St Mary’s and it wouldn’t be out the realms of possibility that Van Dijk will have a number of suitors come the end of the season.

Having arrived from Celtic just five months ago, Van Dijk has produced some top-quality displays since he headed south of the border. He ensured that Martial completed only 1 of his 5 take-ons in his vicinity, as he made 5 tackles from 6 attempts.

Van Dijk has helped Southampton to three consecutive clean sheets, with 5 interceptions and 3 blocked crosses. With minutes remaining he read the play superbly to steal the ball ahead of Rooney by the touchline.

“He hates Pompey” sung the away fans after Charlie Austin scored the winning goal for his new side just a week after his arrival. In the 88th minute his powerful header couldn’t be kept out by David De Gea, after the former QPR forward was allowed a free header.

The corner had been delivered by fellow substitute James Ward-Prowse, who scored a superb free-kick against West Bromwich Albion last weekend. It was fitting that he would provide yet another set-piece set-up in Manchester, after his technique earned comparisons with David Beckham.

“We know that we have quality in our set pieces and that made the difference today,” admitted Koeman after the match. “I mentioned to Charlie when he came on the pitch, go the box and make a good header, then it’s one-nil.”

Romeu almost added to Saints lead just a minute later, but De Gea was able to get his body behind it. The goalkeeper made his 150th Premier League appearance for United, but this period was the only moment in the game when he was called into action.

Van Gaal certainly shouldn’t have been surprised by the outcome, as Southampton have scored the highest amount of goals from crosses in England’s top flight this season with 14 and have also netted a league-high 10 headed goals.

Analyse Man United vs Southampton yourself with Stats Zone