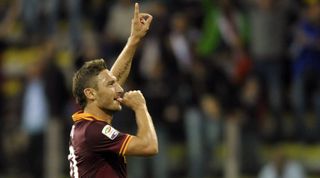 Whenever Roma appoint a new coach – and that’s something that has happened rather too frequently over the past five years – the first question is inevitable; what will he do with Francesco Totti?

Few players in Europe symbolise their club so greatly – Totti is the former Roma ball boy who joined the club as a 12-year old in 1989, made his debut in 1993 at the age of 16, and has played for the club ever since. Now into his 22nd season in the Giallorossi shirt, Totti has has made more appearances for Roma (684) and scored more goals (283) than any other player – on top of that, he’s been the club’s captain for over 15 years.

With such status also comes great responsibility, and there have often been suggestions Roma needed to turn over a new leaf, to reduce Totti’s importance in order to build something more cohesive and sustainable. The problem, however – if you can call it a problem – is that Totti has been astonishingly consistent throughout his career.

Although Totti’s longevity can be compared to that of Ryan Giggs, the Manchester United winger has rarely been one of his club’s three key players over the last 15 years – he’s always been in the background, turning in reliable supporting displays. Totti has always been the star, and frequently Roma’s best player. He’s reached double figures in terms of goalscoring in 10 of the last eleven seasons, despite rarely being used as an out-and-out striker. He’s barely had an average campaign, let alone one poor enough to consider moving him on.

The other incredible aspect of Totti’s career is his versatility. Initially making his name on the left of a 4-3-3 system under Zdenak Zeman in 1997/98, Totti came to be regarded as the ultimate trequartista in his natural position behind two forwards in Fabio Capello’s title-winning 2001/02 season. He was then later a superb ‘false nine’ under Luciano Spalletti in 2007/08. Over the last five seasons, he’s been used in all three of those roles again by different coaches, and always adapts impressively, with minimal fuss.

Roma’s new coach, Rudi Garcia, immediately quashed suggestions Totti would take a back seat during his reign, and has made him Roma’s pivotal player. Six games into the season, Roma have a 100% record, and Totti has once again been his side’s star.

“He's not only an immense player, but a wonderful human being,” said Garcia. “And he's also humble like all great players. Before arriving here I knew the player and the superstar – everyone in football knows the captain. But Totti is a great person too.”

For his first game in charge, Garcia decided to field Totti on the left of his front three, the position Totti frequently played during Zeman’s second spell last season. As always, Totti interpreted the role in his own way, drifting inside into central playmaking positions. He played a succession of cross-field balls to switch the play and created a couple of chances from the centre, although his long-range shooting was inaccurate.

For the next game, Garcia increased Totti’s importance, experimenting with the captain in the centre of his attack – effectively in his old false nine role. It instantly worked, with Totti putting in a superb performance – dropping deep to collect the ball, before playing a variety of through-balls for teammates. He created no fewer than 10 chances in the game, an amazing record.

The next week against Parma, Totti continued in the central position – and the opposition’s fear of his creative potential was summarised by how frequently they fouled him in deep positions. Totti became more of a goal threat in this match, grabbing his only goal of the campaign so far.

A fortnight ago, in Totti’s favourite fixture – the ‘home’ derby against city rivals Lazio – he was yet again superb. Again, he suffered a succession of fouls and created a steady stream of chances.

But what was particularly interesting about Totti’s display was his passing – he played significantly more backwards passes than forward balls. He was playing something of an old-fashioned hold-up role, receiving the ball with his back to goal, and encouraging others forward.

He followed that performance with another fine display in the 5-0 victory over Bologna, where he enjoyed hitting crossfield balls towards the right flank, and managed two more assists.

Roma’s excellent start to the campaign has primarily been about teamwork. “What boss Rudi Garcia has confirmed is that football is not a game for individuals, but that everything depends on the style of play,” said legendary ex-Milan and Italy coach Arrigo Sacchi this week. “Roma have lowered their individual level but raised the collective.”

That’s certainly true, but Roma also possess the league’s best individual so far in 2013/14 – no-one in Europe has recorded more than Totti’s six assists, summing up his ability to simultaneously be a star individual, and a decisive team player.

No wonder Roma tied him to a new two-year contract last month, keeping the captain at the club until just before his 40th birthday. At this rate, there’ll be another extension after that, too.