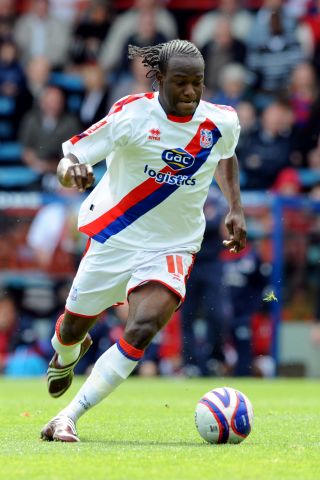 Nickname
I'm pretty lucky in that I've never had one.

Club supported as a boy
Growing up in Nigeria I was an Arsenal fan. Everyone else would be supporting United but I would make sure I was always near a TV when Arsenal were on. I love the way they play their football and the way Arsene Wenger is bringing through young talent is fantastic. They've had a difficult couple of seasons but I reckon they're almost ready to start challenging the likes of Chelsea and United again.

Strengths
I've always had quick feet and I love running at players at pace. I'm skilful and a decent finisher.

Weaknesses
Maybe my work-rate still needs a bit of attention, but it's something I've worked on so there shouldn't be any problems on that score.

I play a bit like...
Zidane, I think. He was a great player – a true football legend. He was amazingly skilful, capable of doing the unexpected and scored some unbelievable goals. He was a different class.

Highlights
Making my debut for Palace was a dream come true. It was against Cardiff at their place a couple of seasons ago and I came on with 15 minutes to go. My first Palace goal against West Brom was also pretty special. They were flying and we played them at the Hawthorns. I think Kevin Phillips put them 1-0 up, then I scored the equaliser.

Lowlights
It has to be getting knocked out of the play-offs at Bristol City later that season. They scored a last-minute winner at Selhurst Park but we were still pretty confident of getting to Wembley. We took them to extra-time in the second leg, then conceded two late goals. That was as low as I've felt in my career, especially as I was so desperate to get into the Premier League with Palace.

Toughest opponent
I went to the Under-17 World Cup with England and played against Brazil's Rafael. He was a top player, definitely one of the best at the tournament. He just had so much energy as well as being very skilful. I also played against Bojan, who has been superb for Barcelona. He was decent, too. He reminded me a bit of Michael Owen.

Best player played with
Danny Welbeck. I played with him for England U19s and he had the complete game. He can score goals as well as create them.

Biggest influence
Zidane is just an inspiration. He played at a level I'm aspiring to reach. He won everything: the Champions League, the World Cup... you name it, he won it.

Biggest practical joker
It used to be Clinton Morrison. He made everyone laugh all the time. I think we really miss him, to be honest. We would be on the coach, sat quietly, and he would just pipe up with some quality one-liners and everyone would be in stitches.

Wheels
An Audi A3.

Flicks
I haven't been to the cinema for a while but I think it was The Pursuit of Happyness.

Favourite holiday destination
The Algarve in Portugal, I reckon. I went there with my girlfriend and it was fantastic.

If I hadn't been a footballer...
I'd have to be involved in the game, so if I couldn't play I'd coach. I just love football – it's in my blood.

Tell us something we don't know about you
I was called up to the Nigerian squad in May. They wanted me to commit my future to them. I think it's too early to make that kind of decision, though. I want to keep playing for England at the various age groups and then have a real go at getting in the full side.

In five years' time...
Who knows? But I'll be trying to play at the highest level. I want to be a Premier League regular, knocking on England's door. There's no reason why I can't be.

Interview: Richard Edwards. From the December 2009 issue of FourFourTwo.