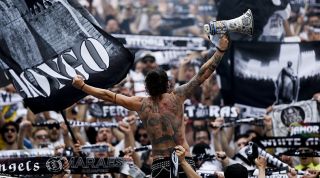 The entire Vitoria lineup was compiled (by Portuguese boss Pedro Martins) of players either from South America or Africa – the first time in history that a team has started a European match without a European player.

More specifically, the XI contained four Brazilians, two Colombians, a Venezuelan, a Uruguayan, a Peruvian, a Ghanaian and an Ivorian.

Portuguese substitute Kiko eventually broke things up in the 57th minute when he replaced the Peruvian, Paolo Hurtado.

Vitoria's Brazilian centre-back Pedrao opened the scoring in the 25th minute, but Valon Berisha denied the home side victory with an equaliser on the stroke of half-time.

The full breakdown of the players and their nationalities can be seen below.