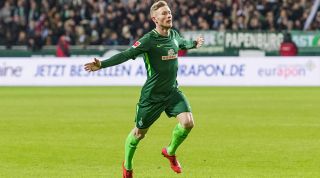 Bremen beat Wolfsburg 3-1 in the Bundesliga clash which lifted them six points above the dreaded red line and into 15th. Kainz scored twice in the hosts' comfortable victory with his best being a decisive strike in the 40th minute to put his side 2-0 up.

Kainz played a delightful one-two with Zlatko Junuzovic before the 25-year-old Austrian ferociously smashed his curled strike into the bottom corner to please the home support.

There was nothing goalkeeper Koen Casteels could do there.

Paul Verhaegh pulled a goal back shortly after half-time (49') but Bremen extended their lead 23 minutes later as Kainz grabbed his second of the night.