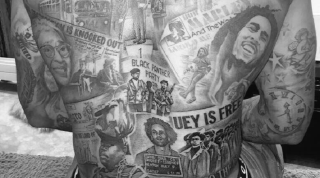 Some serious craftsmanship has gone into Gray's new back tattoo, a complex (and ruddy huge) piece which features various prominent figures from the civil rights movement and beyond.

Muhammad Ali, Bob Marley and Martin Luther King are just a few of the icons from black history who now feature on Gray's body.

Gray declared his new tattoo a "Master Piece!!" [sic] on Twitter – but unfortunately for Watford fans who were hoping for some football-themed inclusions, there's no room for Elton John or Troy Deeney.

The 26-year-old joined Watford from Burnley in a club record £18.5m move in August.