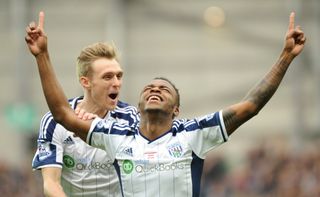 The England Under-21 international smashed home a stunning half-volley, but it proved to be a mixed afternoon for the striker who had to be withdrawn shortly after half-time through injury.

Ronald Koeman's men enjoyed 64% of possession at The Hawthorns and fired off 12 goal attempts to the Baggies' 7, yet they couldn't find a way to beat goalkeeper Ben Foster and now have just one Sadio Mane strike to show for their last four encounters.

For West Brom, the 'Pulis effect' continue to work wonders. Saturday's success lifts the Midlanders up to 13th in the table after a fourth successive game without defeat.