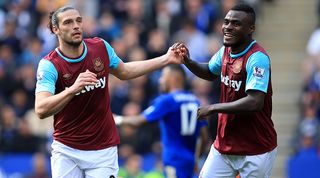 Marko Arnautovic was arguably the club’s biggest attacking success of the last decade or so, and when you consider that he got sent off in his second appearance, took 14 games to score his first goal and left under a cloud after just two seasons, that gives you a good idea of how well the rest have done.

But the east Londoners might actually have found a sensible alternative in Eintracht Frankfurt's Sebastien Haller, who scored 20 goals in 41 games for the German club last summer as they reached the Europa League semi-finals. Frankfurt confirmed on Tuesday morning that terms have been agreed.

But nothing is so clear cut with West Ham – and here’s a guide to exactly what we’re dealing with. The worst part is that nobody has been left out, save for the likes of Alessandro Diamanti and Savio Nsereko who were more ‘forwards’ than ‘strikers’ (if we’re being incredibly generous in the latter’s case).

Bought with the anticipation of being able to do a job in the Championship if West Ham were relegated in 2018. A rare display of forward-planning.

Thought to be the highest-paid player at the club, in a team whose game is based on high pressing with fluid attacking midfielders supporting a striker willing to chase down defenders and use his strength. Can we remind you that, yes, it’s that Javier Hernandez.

Seems like a nice enough lad. Doesn’t seem like a Premier League striker, but we guess that’s what you get when you move for someone off the back of, er... some goals in the League One play-offs?

Club-record signing. Injured on his debut and came back into a confused squad. The best thing he did for West Ham was fail to score a single Premier League goal after returning to Swansea, allowing David Moyes’s squad to fart themselves afloat.

Did a rabona once.

Seemed to really like Romford, which ought to have been a massive red flag. Scored no goals during an expensive loan spell, before banging home 19 in 18 months for Valencia after the deal was cut short.

If you’re paying money to sign Jelavic in 2015, then you’ve already lost. He did at least score an FA Cup third-round winner against Wolves, in a game which most West Ham fans probably don’t even remember happened.

Scored an absolute beauty of a knuckleball free-kick against Bournemouth, but injuries got in the way of anything resembling progress. Joined Everton on loan for reasons nobody was sure of and even he couldn’t explain, before becoming A Good Striker again… in Mexico.

Legitimately good but you got the impression that Slaven Bilic hated him, possibly for reasons unrelated to football. Perhaps the last true attacking bargain the club found, and yet he started just 40 league games his three-and-a-half years at the club.

Tried to force a move to Rennes in August 2017 after flying there for an unauthorised medical, but spent deadline day at Chelmsford Races instead of going to training. At least his agent’s horse won, mind.

Does he even count?

Weird that he came back on a free several months after leaving. Not as weird as when Andy Carroll inevitably does the same.

Proceeded to score the winner against West Ham for Crystal Palace a few months after leaving. Obviously.

The marquee signing after promotion in 2012. Somehow sold at a profit.

A rare good signing, Vaz Te’s goals helped West Ham win promotion in 2012 after he’d (presumably accidentally) washed up at Barnsley. Scored an entirely undeliberate goal in the famous 3-0 win at Tottenham in 2013. You wonder where he is now – probably somewhere surprising like Malaysia, or Chile, or Barnsley again. [The survey is in… and it’s the Chinese second division! – Ed.]

Signed to help get West Ham back into the Premier League. The problem was that West Ham actually made it there, so had no use for him any more.

Sorry, Big John Carew, to give him his full name. If you remember any of his games then you’re lying.

The ‘you have to sign him for £6m if you stay up’ clause feels smarter if you’re confident of being relegated. It’s OK, though: West Ham knew he was finished as a striker… until he went on to score heaps for LA Galaxy.

When we talk about clubs’ banter eras, we generally don’t think to include instances of losing your top scorer on a free because the owners included a relegation release clause and tried in vain to re-sign him after he became a free agent. No one’s that stupid, after all. *Taps earpiece* what’s that? Oh.

An international footballer for two countries, and a striker for two teams that finished bottom of the Premier League in successive seasons under Avram Grant. You could call him multi-talented, but that would be inaccurate.

No goals and one missed penalty might actually count as a net negative contribution; a rare example of West Ham overpaying by signing a player for free (though not the only example of this – see Breen, Gary).

Once went on record calling vice chairman Karren Brady “the devil with a set of tits”. We wish we were making this up.

Not good per se, but scored some important goals. One of those was a diving header equaliser against Everton, made possible by the Brazilian challenging Harry Maguire for the honour of largest head in Premier League history.

Looked really old. Like, retired-uncle-of-already-fairly-old-mob-boss old. Like, former-50s-heart-throb-who’s-seen-some-stuff old. Like, being-played-by-Christopher-McDonald old. His finest moment was a 10-yard first touch that ended up being a perfect assist for Valon Behrami’s opener in a win over Hull.

Quiz! Can you name the 50 Englishmen who’ve managed the most Premier League matches?

The star of Chelsea’s reserves, and a man who scored one (one!) senior goal for West Ham. It’s almost as if ‘the new Carlton Cole’ wasn’t the compliment some thought it was.

Yeah, that Diego Tristan. A full five years after his hot season for Deportivo.

Very noticeably not the same person as Antonio Di Natale, much to West Ham fans’ disappointment.

Perhaps the best of the bunch. Perennially injured and sold to Manchester City as soon as he strung a few games together, freeing up the funds for West Ham to sign many of the names above.