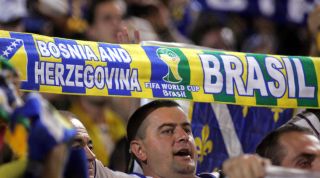 If you're staring blankly at World Cup qualifying tables wondering who needs what to be in with a shout at Brazil next summer, don't worry – we've done the hard work for you.

So which nations will be dancing in the streets tonight? With three in with a shout at qualifying for their first-ever World Cup, there's still plenty of interest outside the obvious gut-wrench of watching England later...

It's fair to say we got a little excited when Group B results went as planned on Friday night. In last week's build-up we pointed to this as the most open group in World Cup qualifying – and sure enough, it's not set to disappoint. With one game remaining there's just a point separating four teams all hoping for a vital play-off spot as Bulgaria (13, +6), Denmark (13, -1), Czech Republic (12, +3) and Armenia (12, -1) go toe-to-toe on the final day.

While Denmark's point against the Azzurri could prove crucial in the final standings, victory for Bulgaria against the Czech Republic in Sofia tonight would earn them second spot. The visitors must win to stand any chance of progression, but even then they would have to hope that Denmark don't beat Malta in Copenhagen.

However, to throw another spanner in the works, it's possible none of these sides will make the play-offs, regardless of their finish. Only the eight best runners-up go through, and the three sides still in the running in Group B would all need some ratehr unlikely results in other groups to avoid finishing bottom of that particular table.

Holland wrapped up top spot long ago, but Turkey (16, +9) and Romania (16, +5) are set for an intriguing battle tonight. Hungary (14, -1) can still make it but would have to bank on neither of the other two picking up points and tonking Andorra in Budapest (which will probably happen to be fair).

While it's the Turks who hold the upper hand on goal difference, they'll need to put home advantage to good use when Louis van Gaal's mighty Dutch roll into Istanbul. Win and they're through to a play-off, but anything else and they'll be hoping Estonia can pull off getting something in Bucharest. It seems unlikely.

Romania will probably feel most confident going into tonight – after all, Holland's 8-1 trashing of Hungary on Friday will have resonated in Turkey.

If Lars Lagerbäck's side can see off Norway this evening, as they did in their very first qualifying game back in September 2012, they'll be in the play-offs for their chance of a first-ever finals appearance.

Even defeat might get them through – Slovenia travel to face group leaders Switzerland, who have already qualified.

Yawn. Russia's place in Brazil is guaranteed with all but a rubber stamp. Three points separates them from second-placed Portugal, who are also seven goals behind. With Russia heading to Azerbaijan and Portugal hosting Luxembourg, it's the play-offs for Cristiano Ronaldo's boys.

It's all eyes on Group G, as Bosnia-Herzegovina stand on the brink of automatic qualification to their first appearance in a major tournament. All they have to do is beat struggling Lithuania (whose only wins have come against Liechtenstein twice, and Latvia) and they're through, barring an outrageous goal glut from Greece.

The Greeks will almost certainly annihilate bottom side Liechtenstein in Piraenus, but they'd need a huge swing of at least 18 goals should the Bosnians win.

Bosnia have gone out to Portugal in the play-offs while attempting to qualify for the last two major tournaments – but just try stopping them this time.

And so it comes to this: England (19, +25) needing to beat fourth-placed Poland to guarantee their place in next summer's Finals. Ukraine (18, +16) will dismantle whipping boys San Marino in Serravalle, meaning it's victory or the play-offs for Roy Hodgson's men.

Having impressed in the 4-1 win over Montenegro at Wembley on Friday, the Three Lions should be confident going into a second home appearance on the spin. They should be, too – Poland have won only three of their nine qualifying games this campaign, two of which were against the hapless Sammarinese.

With one game left, Spain's place in Brazil is not yet confirmed, but it's only a matter of time. Just a point at home to Georgia will be enough for Vicente del Bosque's men in Albacete, with such a result also condemning France, three points behind facing Finland in Paris, to the play-offs.

Definitely in the play-offs: Croatia, Sweden.

Ecuador's brilliant win over Uruguay means they (22, +5) and Chile (22, +3) need only play out the dourest of draws when they meet in Santiago to guarantee their place in Brazil next summer. Neither, however, would lose too much sleep over a defeat either.

A stalemate would resign Uruguay (19, -1) to a play-off against Jordan (which they'll still win, in all likelihood), but even a loss for either side above would require Luis Suarez & Co. to beat Argentina comfortably in Montevideo.

Mexico's 1-0 win over Panama in the early hours of Saturday – courtesy of Raul Jiminez's 85th-minute winner – means it's they who'll most likely be battling it out with New Zealand in the play-offs.