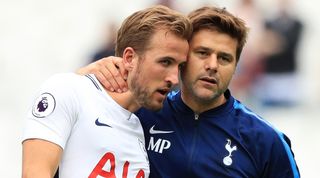 Manchester United were beaten. The 2-0 scoreline confirmed it, but nobody needed to look to know. Paul Pogba had been withdrawn, Romelu Lukaku and Nemanja Matic had both been made to look entirely ordinary, and Tottenham choruses were filling the Wembley air.

Winning always feels good, but this was the kind of victory to nourish the souls of Spurs supporters. Manchester United - for so long a club renowned for brushing Tottenham aside – had been outworked and outplayed. Jose Mourinho had been thoroughly outcoached and, by the time the clock ticked over into injury time, the visiting players wanted no further part of the game.

It was no freak result; this is the standard that Mauricio Pochettino has set and the victory was constructed on the tenets of his coaching. Tottenham passed the ball very well, vertically and with great speed, and their midfield in particular functioned with great harmony. Without the ball, Pochettino’s players were relentless, hunting with intensity and stamping hard on United’s millionaire finesse.

It’s a measure of progress that, really, this is the new normal. Spurs may have some lingering stage fright against some of the Premier League’s best sides, but they are no longer a team that anyone takes lightly. A few miles across north London, White Hart Lane’s successor is nearing completion and that knowledge, married with this performance and the many others that preceded it, offers an irresistible conclusion.

This club is a champion in waiting. Not this season, probably not the next one either, but eventually the organic approach will have its day, the wage ceiling will shatter and Bill Nicholson will finally have some company in the pantheon of genuinely great Tottenham managers.

No margin for error

The trouble with this seductive vision is that it ignores just how narrow the path ahead might really be. One of the great inequalities in English – and European – football is that established super clubs can be run badly, can recruit poorly, make bad decisions each and every season, but are then capable of buying back their momentum.

Manchester United are a good example of that; their rivals City, too. The margin for error is so wide that it’s possible for seasons to stand in isolation. Whatever happens between now and May, both will retool heavily in the summer and start again in August with the same advantages.

Tottenham don’t have that luxury. One season must energise the next, Champions League qualification must be continuous and, generally speaking, any time they flirt with their transfer record they must hit a home run. Breaking the cycle is not an option, because this is a league which punishes stasis heavily enough, let alone regression.

With their new stadium due to open in less than six months, Spurs are approaching a critical point. That new ground will bring opportunity, certainly, but also challenges; the club are attempting to move into a different kind of bracket and they have no past experience of such a transition.

Pochettino is evidently the critical piece. To have a manager of his ability and charisma is as much a curse as it is a blessing. A blessing for obvious reasons, but a curse because the more successful he has been and the deeper the relationships he has forged, the more the club has depended on him. If he were to leave, several first-team players would reflexively consider their own futures.

It stands to reason, then, that whatever advantages New White Hart Lane brings, Pochettino must be completely sold on what he can achieve at the club. For a long time, this building project has been the excuse not to do things. It’s been the justification for that prohibitive wage structure and the restrictions on spending.

Tolerate this and one day it will all be different. That’s never actually been said, but the implication is clear: get the cheese room, get the trophies. Pochettino must be convinced that really is the case, particularly in the face of interest from clubs that can afford to treble his salary.

The only past precedent which is really relevant to this situation occurred - coincidentally - at Arsenal in 2006. When they moved into the Emirates Stadium, the unavoidable problem they faced was the inability to be aggressive. The forced austerity encountered as a result of the ground’s financing meant that their sparkling new arena became home to a regressing team which was, courtesy of a meagre transfer budget, becoming progressively worse.

It’s an example which Tottenham should pay attention to, because it shows that the cathedral-like stadium and diverse commercial benefits are actually worth very little if they don’t translate to something tangible. If Arsenal’s recent history demonstrates anything, it’s the necessity of using a move as a platform rather than a resting point.

Staying still in today’s Premier League is really going backwards and Arsenal have paid a heavy price for allowing that perception to grow. The Emirates should have kept Robin van Persie, Samir Nasri and Alexis Sanchez at the club, but instead they couldn’t wait to escape.

Since Tottenham’s resurgence under Pochettino began, almost every player involved in their rise has been linked with a transfer away. As time passes, the conversation gets louder. Now, every good performance is met with forecasts of a firesale, always with the same patronising tone. It’s irritating for Spurs, but also understandable: Harry Kane may be tethered to the club in a unique way, but Christian Eriksen, Dele Alli and the rest have no obligation to stay and perform if the right stage isn’t being built for them.

It goes without saying that new contracts will be part of that; rewarding players appropriately is now essential. Just as important, though, will be setting a certain tone. Just as with Pochettino, the current squad must be convinced that Tottenham is a club at which they can actually achieve. That doesn’t mean marching an army of high-priced superstars down Tottenham High Road in August 2018, but it does demand that certain behaviours become a thing of the past.

The club can no longer, for instance, continue its late business in transfer windows, hoping for deals to drop out of the sky and asking Pochettino to bed in new players once the season has begun. It must also use the financial advantages that the stadium affords, equipping squads with the parts it needs to last an entire season. Important players must have credible back-ups and every department of the side should be suitably dexterous.

Ranked! EVERY Premier League club by their January transfer business

These are traits of successful sides. They are also, not incidentally, habits of clubs that generally keep their players content. Footballers can be egotistical and materialistic, but they’re also sensitive, feeling the strains that their team is under and sensing the atmosphere inside a club. The new ground will not compensate for the lack of a petrodollar benefactor or an oligarch, but it does provide the opportunity to remove some of the minor irritations which chip away at commitment.

This is a waypoint, then. To the supporters, it marks the delivery of something they’ve been promised for several decades. To the club’s playing and technical staff, though, it’s the moment from which they are owed both a more stable footing and the unequivocal belief that they are committing to something more than just consolidation.