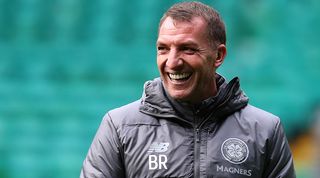 He’s the man with a thousand lines and a smile like a New York office block at night. The chilled-out entertainer with a dedicated parody Twitter account. An inspiration to meme creators everywhere.

But at his core, there’s something far more meaningful in the man who brought us such classics as “I’ve always said that you can live without water for many days, but you can’t live for a second without hope”; something much more visceral than that boombox-touting bravado he brings to his press conferences and ill-advised fly-on-the-wall documentaries.

Although he may never admit it so plainly, Rodgers needs more than stature at a football club to feel fulfilled. Understandably, Celtic fans have been quick to leap on their former manager’s comments declaring that, at various times, managing the Glasgow club was “the ultimate”, “the best job in the world” and certainly “not a stepping stone”. “There’s not a place I could be in this world right now where I’d be happier in my football life and personal life,” he’d chimed in April 2017.

But perhaps they just didn’t understand the 46-year-old like they thought they did.

Tell us what we want

Rodgers has long thrived on the adulation of huge clubs’ fan bases, and is equally expert in telling them what they want to hear – at Liverpool, he fancifully parped to author Michael Calvin that he ran the streets “seeing people go about our business… our people… when the doors are open and you can smell the mince cooking”. For a while, that might be enough for this man of the people.

But eventually it dissipates. When you’ve taken a club as far as you think it can go – as the Northern Irishman claims he has at Celtic, not without good reason after a domestic double-treble and failure to progress beyond a first knockout round in Europe – that’s where Project Rodgers comes to its abrupt conclusion.

To feed his ego, the Carnlough native finds fulfillment in fixing things – or, more specifically, fixing others. At a club that has won its domestic division by an average of 19 points for the last seven seasons, it’s possible that Rodgers simply ran out of projects to keep his fire burning at Parkhead.

There is, you see, something of a messiah complex to the former Liverpool boss; the state of mind, according to Wikipedia, “in which an individual holds a belief that they are destined to become a savior”. That’s not a criticism as such – Rodgers’ motives are ultimately for good, and there is a genuine warmth in the way he discusses working with human beings, rather than players – but it does help to make more sense of his latest career move.

He won’t get the unmatchable roars on wind-swept afternoons in Glasgow at Leicester, and arrives at a club where seventh place feels like genuine achievement in spite of recent history, but there’s more to the East Midlanders than that. In reality, they’re the perfect club ready to be built in his image: a faltering but talented team in need of revitalisation, a clutch of exciting young players ready to drink in his wisdom, sensible ownership to work under, a Europe-leading new training ground in the pipeline and promise of finance to make dreams come true. Or at least something like that, anyway.

Leicester’s fans were already taken in before Tuesday’s win over Brighton when Rodgers was unveiled from the directors’ box, waving to all four sides of the ground like a Colgate-powered Julius Caesar. It was also more telling, though, when stand-in boss Mike Stowell revealed after the game that a “bouncing” Rodgers had left with a buzzing dressing room giving him a rapturous round of applause. “He spoke and the lads were in awe listening to him,” revealed Stowell. “He said, ‘I’ve only left to come here for one reason and that’s to work with this group of players’.”

Hook him up and inject that in his veins immediately. Rodgers needs this. "I don't see myself as a coach, or as a manager,” he proudly told Calvin in his 2015 book Living On The Volcano. “I see myself as a welfare officer.”

Never was that more obvious than with his risky signing of Mario Balotelli at Liverpool, in the wake of Luis Suarez’s summer 2014 departure to Barcelona. “When I lost Luis,” he recalled, “I lost a wee bit of what I've had all my life, people who were written off. I felt like I needed some of that, for me.”

He tried harder with Balotelli than most players, talking to his striker daily, ever-mindful of a difficult childhood in which the Italian had been given up for foster care aged three. And yet it didn’t stop the player later calling their relationship “a disaster” after a troubled spell on Merseyside.

Balotelli infamously scored only one goal in 16 Premier League appearances for the Reds as they finished a disappointing sixth, leaving Rodgers to rue the bad boy he couldn’t turn good. “In all fairness, I just found it very difficult to connect with Mario,” he later sighed. “On the field he tried his best, but it certainly wasn’t something that worked out as everyone would have liked.”

Beyond the general Brentism, that would have hurt Rodgers. He too has been through hardship, losing his mother Christina to a heart attack at 53, and his father Malachy, a hard-working decorator, to throat cancer at just 59 either side of his hiring at Swansea. In 2016, he donated the £100,000 sale of his parents’ house to the Northern Ireland Hospice as a way of honouring his mother’s tireless charity work. “She spent her life trying to help others,” said Rodgers. “I know that she would have been happy that I’ve done this.”

It’s not hard to see why he is the way he is.

And so he goes to Leicester. Evidently, Rodgers really wanted this job – according to reports, the Foxes were willing to wait until the summer to get him, only for their No.1 target to up sticks immediately and trouser his old club £6m in the process. He could have stuck around for an unprecedented treble-treble, but chose instead to waste no time on his new project rather than continue thudding his head against a glass ceiling.

His remit is simple: make a team with obvious promise better than it currently is. Contrary to common narrative, Leicester fans haven’t been brainwashed by their team’s heroics of 2015/16. They don’t expect a top-six finish, and nor is seventh accepted as a minimum expectation – they just want to see their team stand a chance of getting in Europe, or winning a trophy, with a brand of football that might make them get excited about their club again.

Under Claude Puel, only four teams bemoaned a worst home record. For over a year it had been the same: since February 2018, watching Leicester failing to beat Swansea, Stoke, Bournemouth, Newcastle, Southampton (twice, the second time with a man advantage for over 45 minutes), West Ham (twice), Burnley, Cardiff and Crystal Palace. Losing at Newport in the FA Cup with a drastically weakened team was the sour cherry on top.

For most Foxes supporters, simply being Not Claude Puel was a good start for their new man, although that would be far too harsh an assessment of the Frenchman’s time in charge. If not demonstrated in their league position, Puel did shift Leicester away from the arresting memories of their title win and left the club in a much better way than he found it.

A January 2019 study by BBC Sport found that the ex-Lille boss had given twice as many minutes to players aged 22 and under as the next-highest club on the list alone, and the exciting January signing of Youri Tielemans on loan from Monaco only brought the team’s average age down further. Of the XI that started against Brighton, Tielemans, Harry Maguire, Ben Chilwell, Wilfred Ndidi, Ricardo Pereira, James Maddison, Demarai Gray and Harvey Barnes were all 25 or under.

FINE TIME? Why the FA will always struggle to find the right monetary punishment

But Leicester do need the personality that Rodgers will bring in Puel’s stead. The stories of squad discontent were too plentiful to be without truth, and that ill feeling was surely the most detrimental aspect of Puel’s fraught time at the helm. Now their new manager effectively has three bonus months to get his house in order, avoid mistakes of the past and prepare for what will be a big summer in this expectant corner of the East Midlands.

A glorious magic carpet ride of development awaits, as someone might say.