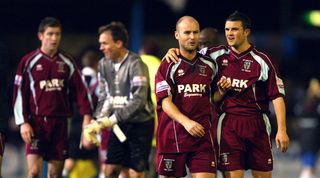 Blandford School is a hive of activity. Parents’ cars are swooping down its driveway to pick up children, skateboards are clattering and clunking in a nearby enclave, and the smell of chlorine is leaking from an indoor swimming pool, out into the winter night.

Half an hour away from Poole and tucked up towards the New Forest, Blandford Forum is an unlikely place for one of the country’s upwardly mobile non-league sides. But this is Weymouth FC’s home away from home, their training base on Tuesday and Thursday nights.

Now into their third season under the management of Mark Molesley, the former Bournemouth midfielder and the current u21 assistant manager at Dean Court, The Terras are flying high in National League South, having won the Southern Premier South in 2018-19, and remain in the hunt for a second successive promotion.

The school’s halls have been dark for hours. In one classroom, though, the lights are still glowing. The desks are arranged neatly. On each of them is a player-by-player breakdown of Saturday’s opponents, and a graphical representation of their expected shape. There’s a bottle of water and a protein bar waiting in every place and after the players troop inside, their catching-up and their warm-ups done, metal chair legs clang and scrape and the room settles into silence.

Tom Prodomo, Molesley’s assistant manager, is at the head of the class and he’s holding a single red rose. It’s the £2.50 petrol station type and it’s seen better days, but Prodomo promises it to the best trainer that night.

“Or the worst”, someone snarks from the back, as the lights go out.

National League regulations mean that teams must submit footage of their games by 6am on Sunday mornings. From there, Weymouth’s Head Performance Analyst, Danny Webb, begins his preparation, cutting clips to Molesley’s instructions, preparing them to be uploaded onto a club app.

Now, they’re being beamed onto the whiteboard. Molesley doesn’t believe in long analysis sessions. He understands that his players have done a full day’s work before getting here, and knows that the information has to be short, sharp and to the point.

Prodomo leads the session. He’s a teacher and it shows in how he holds the room’s attention as he rattles through his points. Each clip is specific to a strength or weakness the team will be encountering in 48 hours’ time, but also provides a context for the work they’ll be doing tonight.

One shows how well that opponent boxes teams into their own defensive third, passing around the penalty box, but still locking down the exits.

Prodomo gives his notes, and then Webb moves on to the next slide.

Next, he highlights how their full-backs under- and overlap to penetrate the penalty box and where they want to be crossing from. Footage can be hit and miss in this league, Webb tells me later, because some grounds don’t always have the right vantage points, but the package is neat and concise and even I’m able to follow.

Yemi Odubade’s here. He's 35 now, but he's played in the Football League. Back in 2007, I was at the Kassam Stadium to see him score a brilliant goal for Oxford United, against Dagenham & Redbridge. In the 13 years since, having never seen it back, it’s grown in my mind like a Chinese Whisper. From 35 yards to 40, 40 to 45.

It was from 30, he insists with a smile, and we talk about the late Dagenham equaliser which broke Oxford hearts that night.

The floodlights surrounding the astroturf flare out into the night. On the surface below, the session is finding its rhythm. At one end, Prodomo leads a frantic rondo. In the middle, Molesley is running a pressing drill, calling out the triggers to what will be Saturday’s front-four and urging them to be more vocal.

In the far corner, Robbie Yates is working his four goalkeepers. Two are up at a time, guarding nets at right angles to each other, while the two spare and Yates himself pepper the goals. It’s mesmerising. It’s also extremely cold and the balls are whistling through the air, stinging palms and wrists and smacking into exposed flesh.

Training will last for just over an hour-and-a-half. The schedule is rigid and someone, somewhere always has an eye on the watch. As the different segments approach, the coaches shout across to each other, volleying requests and instructions.

Weymouth don’t waste a second. They can’t. These are semi-professional players with lives outside the game. Molesley and his staff only have them twice a week, so sessions have to be precise. It also means that match preparation can never be complete. It’s Jose Mourinho’s 'short duvet' aphorism, but for real - some departments have to be prioritised above others, not every facet of the team can be attended to every week. It’s always a calculated gamble.

That night, the bulk of the session is dedicated to a set move. Footage of the weekend’s opponents has revealed two areas of weakness: a tendency to be caught out by quick transitions, and a habit of leaving big gaps behind their full-backs.

The strategy is built quickly, but step-by-step. Molesley sets up a drill in the centre-circle, with midfielders shuttling between mannequins, collecting a pass, and then playing a driven diagonal across the pitch. It’s repeated, then adapted. This time, with a floated, lofted pass, which is supposed to hang out above the far touchline, and then draw back infield.

Weymouth are not an especially big or physical team, at least not up front, but they are nimble and technically good. On Saturday they’ll face a side anchored by centre-halves who want to face the play, hit their passes long, and avoid being turned around. Back in the classroom, the players were shown some of the goals they’ve conceded recently and they'll know that this is definitely the routine to hurt them.

The training mechanics are slick, but the engagement is as impressive. All of Molesley’s players have, at one point or another, felt football’s cold hand. They’re here because someone, somewhere has told them that they’re not good enough, not big enough, or not quick enough. The assumption is that this should be a place of bitterness; home to dozens of different agendas and a festering pool of unrealised ambition.

Not at all. There’s total buy-in. The staff are aware that time is precious, but the players are just as vigilant. There’s no messing about or reluctance. No obvious cliques. This is a team at work.

And these are really good players. It’s a shame that professional clubs are so guarded, because if supporters had the privilege of this kind of access then they’d better appreciate what they were watching. They’d know how quick it was, how good the first touches are, how physically demanding it must be. At the least, they’d appreciate the slender margins and the amount of effort – physical and mental - which goes into putting a team on the pitch.

What you also realise, as an outsider, is that you know nothing at all about football. Not its mechanics, anyway. Television has given you the belief that you do, it’s taught you footballese and enough of it to sound the part, but Weymouth’s players respond and react to all sorts of commands that might as well be in a different language.

With 20 minutes left, all the disconnected parts of the session are being slotted together. It’s near enough 11-a-side now, almost a game scenario. It’s subtly stage-managed, though, so that there’s relevance to Saturday's match in all the phases, with every player being asked to do something that they’ve worked on tonight.

On Saturday, Weymouth will face long balls at the back, so huge clearances are being launched towards the centre-halves, with the deep midfielders snapping on to the second balls. Elsewhere, the press is biting in midfield, against players now rather than mannequins. And, when Molesley calls for it, a quick combination on halfway sets up the drilled diagonal. Then, a few minutes later, there’s the looping ball, dropping in to the full-back channel.

It’s a seductive environment. There’s so much enthusiasm. A club director is there to watch training and talk pridefully about the progress over the last three years. Every few minutes he breaks away from the conversation to retrieve balls that have escaped the perimeter fencing. Then he comes back, picking up his sentences where he left them. Whenever there’s a change in drill, he’s off again, out across the lines to move cones or goalposts, anything to make the transition that bit easier.

It’s not affected, it just seems part of the culture. On a night when there’s a bitter cold blowing in off the coast, everyone’s here, doing their bit. It’s not half-hearted, either, because attention to detail is mandatory. At one point, there’s a light scolding for someone who allows an underinflated ball to enter a drill. Later, when a gust of wind flattens a family of mannequins, it’s another figure from the perimeter who rushes out to pick them up and put them back in their place.

Time is very precious. Weymouth don’t have a money man or a benefactor, their improvement mainly has to come from within. Every second spent with these players is important and that urgency can be felt all around.

They’re friendly and welcoming, too. The staff, the players, the officials. Trite observation though that may be, it’s worth making. The Premier League is not like that. It shares itself with great, overstated reluctance and, across the divisions, media officers stand, sentry-like, on guard in front of anything interesting. Here, they’re proud of what they’re doing and it’s thrilling to actually be allowed to see it.

It’s nearly 10.30pm by the time the players are back in the changing room. One is getting a massage, others are dressing to go home. It smells of liniment oil and deodorant, like every changing room that has ever been inhabited. In the corner, there’s a whiteboard listing the average time it has taken Weymouth to take throw-ins in the different thirds of the pitch. When the team is attacking, when it’s defending. The detail really matters here.

By the door, Molesley is talking to a player who has recently recovered from injury and is fit to play on Saturday.

“Have you read that book I recommended?" The player hasn’t. But he will. And he seems to mean it.

By 10.45pm, the cars are beginning to drift away, their headlights snaking up the school’s driveway and out onto the main road. All of Weymouth’s players live within two hours, but most of them will be at work tomorrow. If they have children, they’ll have long since gone to bed. If they have wives or partners, they’ll also be asleep by the time they get home.

So these are long days and on, Tuesdays and Thursdays, they’re long nights too.

But by Saturday it’s worth it, because Weymouth will win again.

QUIZ Can you name every Premier League club that Riyad Mahrez has scored against?