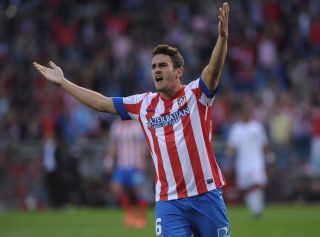 Between Belgium and Switzerland’s World Cup qualifications, and England’s old-timers raging against the dying lights of an emerging crop of youngsters, there has been much talk of golden generations lately. But at what point does a golden generation become, simply, a land of gold?

Spain are the reigning world and European champions having won three consecutive major international tournaments, a feat never previously achieved. Their current honours list is as long as a sweet siesta on a hot summer’s day – particularly if we include their success at youth levels. And we could be here from now until next week reeling off a list of Spanish stars to grace the game in recent years.

The next talent to emerge from a seemingly unstoppable production line is Jorge Resurrecciòn Merodio, otherwise known as Koke.

A product of Atletico Madrid’s burgeoning youth system of which Saul Niguez, Javier Manquillo and the exceptionally promising Oliver Torres are also names to jot down for future reference, Koke has been a central figure in Atleti’s steady rise from La Liga also-rans to Copa Del Rey winners and growing powerhouse.

Already linked with Manchester United, the 21-year-old is also a key cog in a team that boasts a 100% win record from its first eight league games, including a 1-0 win at the Bernabeu - their first league victory over their rivals in 14 years. They are now genuine contenders to smash the Barcelona-Real Madrid hegemony that has dominated Spanish football for what feels like a lifetime.

A midfielder with skill, craft, an excellent eye for a pass and superb set-piece delivery, Koke was born in January 1992, the year Queen’s Bohemian Rhapsody topped the UK charts for a second time. It also happens to be the year Atleti last beat Real Madrid in a Copa del Rey final, again at the Bernabeu.

It was Koke 21 years later – an Atleti fan and academy graduate – who crossed for Miranda’s winning goal as Atletico won 2-1 after extra time. Football, like life, is blessed with such moments of symmetry.

To celebrate that historic win, their first against Real in 23 attempts, Koke danced around the Bernabeu pitch in a state of fervour as the red and white half of the ground erupted. He signed his name into Atletico folklore by carrying an Atleti flag into the centre circle, laying it down like an army general claiming the spoils of a victorious battle and kneeling down to plant a kiss on the club colours.

To Atleti fans he became an instant hero. “I know that this image has stayed burned in the minds of Atletico fans and I’m happy about it,” Koke reflected on his newfound icon status. “It was an unforgettable moment.” It was also a far cry from the more regrettable Europa League winning celebrations, when the youngster was forced to apologise after inadvertently wearing an Atletico scarf emblazoned with Nazi iconography.

Koke was born in Colonia de los Taxistas – the same barrio as Alvaro Negredo. But if Manchester City’s new man is the ‘Beast of Vallecas’, Koke is the brains.

He made his Atletico debut in 2009 under testing circumstances: a bright-eyed 17-year-old coming off the bench in a 5-2 thrashing at the hands of Barcelona in Camp Nou. Little by little he began to establish himself at the Vicente Calderon, growing into an important part of Simeone’s first team. In March he made his 100th appearance for the club.

At international level Koke appeared at every age group for his country before making his senior international debut in Guayaquil against Ecuador in August. He was a key part of Spain’s Under-21 European Championship in Israel this summer.

As a player, one of Koke’s biggest strengths is his versatility. He can play anywhere across the midfield and even at right-back, where he appeared for Spain in a 2-0 win against Finland.

“He's a very complete midfielder and he does virtually everything in that role,” Spain coach Vicente del Bosque enthused before handing Koke his international debut. Tactically, his intelligence is a natural fit for Simeone’s disciplined midfield unit.

Koke’s rapid development has not gone unnoticed among his team-mates. Left-back Filipe Luis sits in behind when Koke plays at left midfield and the Brazilian raves about him. “I can say I have followed him since his first day, having watched him join the first-team squad,” Luis tells FourFourTwo.

“He was then a common player, very shy, humble. What surprised me the most is how he has developed since then – much, much, much more than any player I’ve seen before. And let me tell you, he hasn’t changed a bit since, he’s still the same. He plays in any position you ask him and sacrifices himself for the team, though he’s at his best with the ball.”

Koke’s ability to wreak havoc from dead-ball situations is reminiscent of a young David Beckham, with whom he dons the 2009-era barnet to match. His accuracy from set-pieces is also reflected in open play.

Koke – or Georgie Resurrection as he’ll be known if he ever comes to England – leads La Liga’s assists table with six in seven starts, averaging 2.8 key passes per game. Last year he finished the season in joint eighth for La Liga assists and made more key passes per game than both Ronaldo and Messi. Reminder: he’s still only 21.

An example of his astonishing creative streak came in that 1-0 win at the Bernabeu. The Spaniard has developed a wonderful understanding with Diego Costa, another man of the moment, and all that is good about their apparently telepathic union was demonstrated in Koke’s through ball for the winning goal, an outrageous piece of creativity only bettered by the frankly ridiculous ball he played to David Villa in the 26th minute – a 20-yard first-time pass with the outside of his foot that landed at Villa’s feet as if delivered by butler on a silver charger plate.

“They mesh perfectly,” Diego Simeone said of the pair. Koke’s inventive nature has been a major contributing factor to Costa’s rise.

For now, any talk of a move away from Atletico looks like just that – talk. Koke is settled in Madrid and recently signed a new contract tying him down until 2018. “I have just renewed and I’m at my club, which is like a family to me. I want to stay here for many years and see out my contract. I am very happy here.”

Despite this, Filipe Luis feels offers will soon be forthcoming for the midfield maestro who, besides being a fine passer, is no shrinking violent in the tackle, flying into challenges with gay abandon when necessary.

“I’m sure he’ll get a lot offers by the end of the season,” Luis tells FourFourTwo. “It’ll be very difficult to hold him. He’s reached a spectacular level.”

Contract extension or not, it won’t be too long before Europe’s biggest clubs start sniffing around Spain’s newest golden boy.