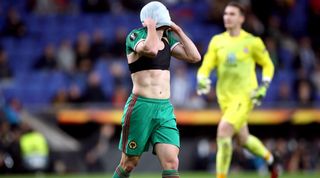 Wolves went into the second leg against Espanyol in cruise control as they led the tie 4-0 on aggregate.

But Nuno Espirito Santo's men had an early scare as their opponents, who sit bottom of La Liga, drew first blood.

Wolves soon leveled but were behind again before too long thanks to Jonathan Calleri, who scored his second from the spot.

The Premier League side pulled it back to 2-2 through Matt Doherty, and the game was suddenly there to be won for Wolves.

As the Portuguese winger capitalised on a misjudged backpass, he was off at full throttle, speeding toward the goal. He rounded the keeper, goal at his mercy, opened up his body, and the ball flew into the n- oh.

It's a good job Wolves are comfortably through on aggregate...

As he buried his red face in the green shirt, the 19-year-old was no doubt counting his lucky stars that Wolves were 6-2 up on aggregate and not chasing a winner.

Wolves ended up losing the game 3-2, but progressed to the next round nonetheless. It was never really in doubt, with the odds stacked against Espanyol from kick-off.

Prior to the game, Espanyol manager Abelardo Fernandez had optimistically noted: "If Buster Douglas can beat Mike Tyson, why not us?". Douglas was a 42-1 outside bet that night – much shorter than those you'd have gotten for poor Neto burying his big opportunity to kill the tie.