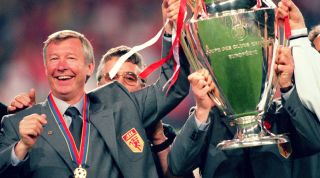 Remember to tweet your scores @FourFourTwo and share with your friends - why not send it to a United fan?

Manchester United have enjoyed some triumphant nights in Europe.

In 1968, Matt Busby's side became the first English side to win the European Cup, just 10 years after the tragedy of the Munich Air Disaster.

31 years later, the Class of 92 came of age and Ferguson's Red Devils capped off a superb decade with their second European Cup. Ferguson repeated the feat in 2008, beating Chelsea in the final in Moscow.

The last few years may well have been difficult for United fans, but a 2017 Europa League victory was very welcome.

All we want you to do today is tell us who was involved on these classic nights.