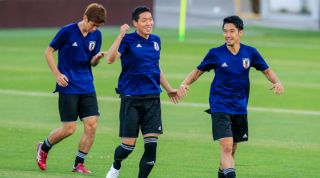 Japan know that a victory against Roberto Martinez's side on Monday would secure the Asian nation a place in the World Cup quarter-finals for the first time in their history.

With the game on at an inconvenient hour, Tokoji Temple - in central Japan’s Shizuoka - is opening its doors to hold a viewing party, but they've pleaded that any incoming visitors watch the game in a calm mood.

"I’m looking forward to seeing many people visit us and enjoy, as a lot of people are interested in the World Cup," chief priest Taiko Ishida told news agency AFP.

"Since it’s a temple and the game is taking place quite early in the morning, we hope people will watch the game calmly without whistles or drums, except when goals are scored.

"I am quietly wishing for victory."

As well as a big screen, fans are allowed to enjoy a special meditation practice and some delicious rice gruel free of charge.