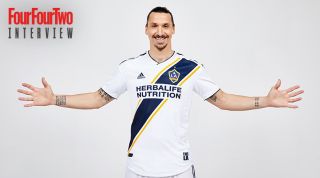 After lifting league titles in the Netherlands, Italy, Spain and France, the Swede joined Manchester United in 2016 hoping to win the Premier League at the age of 35.

Although the league crown eluded Ibra’s grasp, 28 goals in 46 matches helped the Red Devils taste League Cup and Europa League glory, and he’d likely have scored even more had a knee ligament injury in April not ended his campaign prematurely.

Speaking exclusively in the December 2018 issue of FourFourTwo magazine, out in shops and on iPad Wednesday, Ibrahimovic revealed how keen he was to show everyone that he could cut it in the English top flight.

“I’d had a long career before I came – different kinds of countries, different kinds of clubs,” he told FFT. “People said, ‘You don’t need to go to England, because if you fail in England, people will always say you weren’t good enough’. Everybody was against it. And guess what? That made me motivated. That gave me adrenaline.

“I liked the Premier League. I found it very motivating and very exciting. It gets a lot of attention, although I feel the quality is a little bit overrated – the individual quality, the technical part. But the rhythm is high. Even if you are the best, if you can’t handle the rhythm, the pace, then you will not succeed, because the pace is very high.”

Despite returning to action within seven months, Zlatan made just seven more Manchester United appearances before moving Stateside with LA Galaxy in March 2018.

He claims the Premier League was fortunate that he was 35 by the time he finally played in it, as who knows what havoc he could have wrecked a decade earlier.

“I’m super proud and super happy that I went to United – it was the right club,” he says. “We won, and I did what I did before I got injured. I had an excellent time – great memories. I’m attached to United forever. The supporters are amazing: wherever I went, I saw red shirts, which was fantastic. It’s a very important moment in my career.

“As I said when I was in England, you’re lucky I didn’t come 10 years ago, because if I did what I did at 35 years old, imagine it if I was 25. Then it would have been a different story. I came there and they said I came in a wheelchair. All the people that talked, in the whole Premier League, I put them in a wheelchair. That’s what I did.”

Read the full interview with Zlatan Ibrahimovic in the December 2018 issue of FourFourTwo, in which we also meet Bayer Leverkusen starlet Leon Bailey in a field full of cows, chat to Manchester United midfielder Fred, and go One-on-One with Jermaine Pennant. Plus, we remember when British bosses ruled La Liga, learn everything there is to know about commentating, and hear how fighting in the Rhodesian Bush War helped Bruce Grobbelaar stand up to King Kenny. Order a copy, then subscribe!