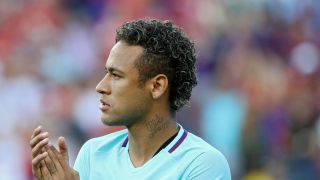 After four seasons at Camp Nou, Neymar's Barcelona career is set to end with a world-record €222million switch to Paris Saint-Germain.

Barca won the race to sign the Brazilian from Santos in 2013 and, alongside Lionel Messi and Luis Suarez, he has since established himself as one third of one of the greatest attacking trios in the history of football.

PSG are expected to trigger the €222m release clause in Neymar's contract and make him the leading man in Paris, ending a scintillating on-field relationship with the Catalan club.

With the help of Opta data, we look at the stand-out figures that have encouraged the Ligue 1 giants to part with a record-breaking sum and take the 25-year-old to the Parc des Princes.

Neymar Jr hasn't trained on Wednesday with the permission of the coach August 2, 2017

105 – The number of times Neymar hit the back of the net in all competitions during his Barcelona career. Rivaldo is the only Brazilian to have scored more for the club (130).

59 – Add in this impressive number of assists and the 25-year-old was involved in 164 goals in his 186 appearances for the club.

7 – The amount of goals Neymar has scored against PSG. He has only converted more against Athletic Bilbao (8) and Villarreal (9).

7 - Neymar has scored seven goals against PSG in , more than any other player in the competition. Romance. July 28, 2017

6 – Villarreal's Sergio Asenjo, formerly of Atletico Madrid, was beaten by Neymar more times than any other goalkeeper.

15 – Neymar won a total of 15 penalties for Barca during his LaLiga career; only Cristiano Ronaldo (17) has earned more spot-kicks in the competition.

21 – The amount of assists supplied by the former Santos star in 2016-17, more than any other player based in LaLiga.

22 – Neymar set up more goals for Messi than any other team-mate during his time at the club.

6 – The Vicente Calderon was the away stadium at which the Brazilian proved most prolific, scoring six goals, including his first for the club in the 2013 Supercopa de Espana, away against Atletico Madrid.

431 – No individual has been fouled more times than Neymar across the top five European leagues since his arrival at Barca. Preparim Hetemaj (410) is the only other player to have drawn the referee's whistle over 400 times in that span.

39 – Barca's treble-winning 2014-15 season proved Neymar's most prolific at Barcelona. The only other time he passed the 30-goal mark in four campaigns with the Catalan giants was 2015-16.