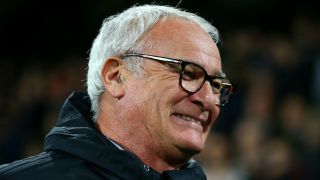 Ranieri is a great at the King Power Stadium, having guided Leicester to their remarkable Premier League title in 2015-16, before being sacked midway through the following season.

And the Italian went up against his former employers for the first time at Craven Cottage on Wednesday, with James Maddison's late goal securing a share of the spoils for the Foxes following Aboubakar Kamara's opener.

With a win, a defeat and a draw from his opening three fixtures as Fulham boss, Ranieri claimed neither side did enough to clinch victory, and agreed the occasion was a memorable one.

"It was a very emotional match for me," he told a news conference.

"Both Fulham and Leicester fans sang my name in the beginning and end of the match.

"The experience was fantastic from the beginning.

"The emotion was just at the beginning. When the game started, I just concentrated on my team – it's normal.

"I think the draw was right, because they created one great chance at the beginning and Sergio Rico made a fantastic save.

"In the second half we started much better, we had chances to score. Suddenly, they made a good combination and drew the match.

"One point is much better than nothing. Well done to both teams."

just one point, but great team effort and winning attitude til the final whistle. From tonight, focused on the next match December 5, 2018

The draw leaves Fulham rooted to the foot of the Premier League, while Leicester are ninth, and Claude Puel was pleased with his side's resilient comeback.

"We played a good team, who did well against Chelsea and Southampton," Puel told BBC Sport.

"We were up and down in the game and we needed to manage it more.

"I would like to congratulate my players for coming back, which is a good thing for our mentality. We believed in ourselves and that's a good sign for the future."