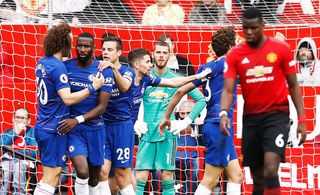 This will be Frank Lampard’s first league fixture as Chelsea manager after joining the club in early July following a successful managerial debut at Derby.

The game is also likely see to Harry Maguire start for Manchester United for the first time after signing for the club for a record £80 million, making him the most expensive defender of all time.

Here, PA looks at pictures from some memorable encounters between the two sides.