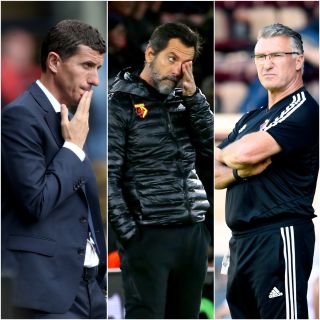 Watford have confirmed that head coach Nigel Pearson has left the club with two games of the 2019/20 Premier League season remaining.

Pearson was the third manager in the Hornets’ hot-seat this season. Here, the PA news agency takes a look at the records of the three incumbents.

Spaniard Gracia – brought in to replace Marco Silva in January 2018 – had guided the Hornets to the FA Cup final last season, where they were thrashed 6-0 by Manchester City. The former Rubin Kazan and Malaga boss, though, lost all three of the opening Premier League games in August, with the only victory being a Carabao Cup tie against Coventry. With the club bottom of the table, Gracia was sacked on September 7 – and Watford swiftly announced his replacement.

Within half an hour of Gracia’s dismissal, former Hornets boss Quique Sanchez Flores was confirmed as the club’s 11th managerial change in just over eight years. Returning for a second spell at Vicarage Road, having left in June 2016, Sanchez Flores saw his side thumped 8-0 at Manchester City and lasted just 85 days before he was sacked following a 2-1 loss at Southampton.

Former Leicester boss Pearson was appointed as Watford’s new head coach, initially until the end of the season, in early December 2019 with the team still bottom of the table after two games under caretaker Hayden Mullins. Despite an upturn in fortunes – including a home win over Manchester United in a run which lifted them out of the relegation zone – the Hornets have slipped back into trouble.