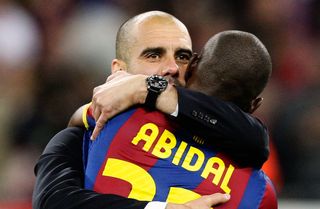 Guardiola led the Blaugrana to three La Liga titles and two Champions League triumphs during a glittering four-year spell in charge at Camp Nou, and has won another two Bundesliga crowns since taking his talents to Germany in 2013.

The 44-year-old will leave the Allianz Arena in the summer and has already indicated that England is his next destination. Manchester City are the favourites to snare the sought-after signature, although Manchester United, Chelsea and even Arsenal have not been completely ruled out of the running.

Wherever he ends up, Abidal says the smooth Spaniard will be working around the clock and won’t mind getting angry if things aren’t going his way.

“Of course I saw him get angry. It’s the same with every coach,” Abidal says in the February 2016 issue of FourFourTwo, out now. “After his very first home game, against Racing Santander, he called a meeting in the dressing room. We’d already lost the first away game, at Numancia, and now we'd drawn at Camp Nou. Guardiola said: ‘Look, guys, we worked hard in pre-season, but you have to believe in my plan if you want to win La Liga and the Champions League.’

“After that, the team played like Guardiola wanted. At first, he’d faced egos and resistance to change. Players wanted to play how they wanted, but after that meeting everything changed. We won our next league game 6-1 at Gijon.

"From eight in the morning until eight at night he was in the training centre. He was coming up with new tactics, planning the little details. This was a big reason he was so successful. He gave Barça a different idea of football. He said: ‘Play the ball, pass, pass, pass, touch, touch, touch, then in the last 30 yards, make a difference.’”

Read the full One-on-One with Eric Abidal in the February 2016 issue of FourFourTwo, in which the former France international talks about taking a penalty in the World Cup final and lifting the Champions League trophy two months after having a tumour removed from his liver. Also in the magazine: the legend of Francesco Totti and the truth about the most misunderstood player of a generation; an exclusive chat with Everton frontman Romelu Lukaku; football vs food: 25 tales of when snacks attack; remembering Sven-Goran Eriksson’s appointment as England manager 15 years ago and much more. Subscribe!