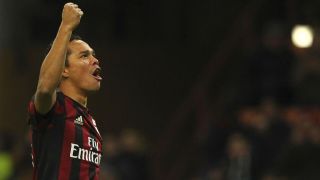 Milan have reportedly lined up World Cup-winning veteran Marcello Lippi to replace Mihajlovic but three vital points could yet see the Serbian extend his embattled tenure.

Bacca put Milan into the lead within four minutes, turning his marker and bending a lovely finish beyond Ciprian Tatarusanu after being played in by Giacomo Bonaventura.

The Rossoneri had won only one of their last nine league games against Fiorentina but, after taking the lead, they rarely looked like relinquishing control of the contest.

And when Boateng came off the bench to score on his second debut for the club, Milan's victory, which sends them up to sixth spot in Serie A, was sealed.

Milan lifted some of the pressure on their under-fire coach by scoring in the fourth minute.

Bonaventura slipped a through-ball into the channel for Bacca to chase and the Colombia international cut inside before beating his man and firing home a ninth Serie A goal of the season.

La Viola, who won the reverse fixture 2-0 in August, responded by dominating possession without penetration and they struggled to work a clear opening against a diligent Milan defence.

Nikola Kalinic, who scored a hat-trick against Inter on his last appearance at San Siro, almost got on the end of a cross on 37 minutes as Fiorentina continued to press, before Matias Vecino headed a corner well wide.

Bacca's goal was the only shot on target in a first half that was played at a pedestrian pace but Fiorentina were much more positive after the break.

Donnarumma's weak punch did not clear the area and the loose ball briefly caused chaos, but Alex was alert and got the ball away.

Kalinic then dragged a shot well wide from a good position after a rapid break, before heading a cross just over the crossbar.

Milan had won only one of their last five Serie A matches but should have doubled their lead on the hour-mark, Luca Antonelli shooting tamely straight at Tatarusanu from 10 yards.

Borja Valero fizzed a low drive wide of Donnarumma's post on 68 minutes as La Viola fought for a way back into the game but their effort was in vain.

Boateng had only been on the pitch nine minutes when he raced on to Juraj Kucka's ball over the top to add a second goal in the 88th minute, securing the result to Mihajlovic's obvious relief.

Boateng's fellow substitute Mario Balotelli should have added a third goal deep in injury time but the striker somehow missed the target from four yards.

-AC Milan scored their opener with the first shot of the game; in the reverse fixture, the Rossoneri did not have a single shot on target against La Viola.
-Giacomo Bonaventura supplied his seventh assist of the season – a joint-most in Serie A along with Paulo Dybala and Lorenzo Insigne.
-Carlos Bacca scored his ninth Serie A goal for AC Milan with his 19th shot on target of this campaign. -Six of Bacca's nine total goals have come at the San Siro.
-AC Milan got back to winning ways against Fiorentina, after picking up only one point from their three previous meetings against La Viola in the league.
-AC Milan are still unbeaten in this campaign after taking the lead (W9 D2).
-Fiorentina have picked up only one point from the seven games in which they've been trailing so far in this campaign (D1 L6).
-Only one of Fiorentina's 14 total shots against AC Milan was on target.
-Nikola Kalinic was the player with the most shots in this game, but none of his four attempts was on target.
-AC Milan had only 31.2 per cent possession in this game – only Roma have won a Serie A game with a lower possession this season (29.2 per cent, also against Fiorentina).