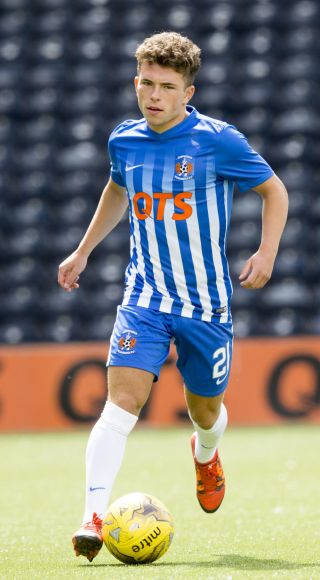 The 21-year-old has endured a frustrating season and is currently battling his way back from foot surgery.

But the winger is determined to re-establish himself in the Rugby Park line-up once chairman Billy Bowie decides on new Scotland boss Steve Clarke’s successor.

Rugby Park academy product Frizzell, who has not added to his 49 club appearances since returning from a loan stint with Queen of the South in January, said after agreeing to another 12 months in Ayrshire: “I’ve stalled this season through injuries but it’s good to get another year and I want to recover and kick on.

“The surgery went well and the focus is on my recovery. It’s a bit strange when everyone else is off but there’s nothing I can do apart from get back as soon as possible.

“Of course, I will want to impress the new manager but I can’t rush things.

“I just need to make sure it is right but I should be back around the start of the season so it’s good that I’m not missing much football in that respect. I just need to get my fitness back and come back stronger.”

As well as losing Clarke to the national team, Kilmarnock have also confirmed this summer’s first set of departures from the dressing room.

Austrian keeper Bachmann joined from Watford and went on to keep 14 clean sheets in 28 appearances.

Liverpool striker Millar scored just one goal in 13 appearances while Mulumbu failed to make the same impact as he managed during his first Rugby park stint after returning from Celtic.

Tshibola is heading back to Aston Villa having spent 18 months at Killie while Ndjoli has rejoined Bournemouth after struggling to maintain his early season form which saw him fire four goals in his first five games.

January arrival McAleny is back at Fleetwood having contributed three goals in 13 games.