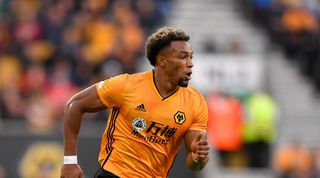 Adama Traore says he would not rule out playing for Real Madrid in the future.

Traore has scored four goals and provided six assists in 2019/20, and has already racked up double the amount of league starts he managed last campaign.

The forward made four first-team apperances for Barcelona after graduating from the club's youth ranks in 2013.

But despite his connections with the Blaugrana, Traore insists he would not turn down Real Madrid if an offer came about.

"I don't have resentment towards Barca, only good memories, but if Real Madrid called me I would think about that offer in the same way I would if it was a Barca one,” he told Cadena SER.

"I was there [at Barcelona] for 10 years and I have great memories.

"There were some problems with the club, some misunderstandings, so I decided to leave to grow as a player.

“I took that decision but I prefer not to talk about the story I had with the club, it was a decision I took in that moment and I don't regret it.”

Traore is eligible for both Mali and Spain, and pledged his allegiance to the former in November.

However, the Wolves attacker was called up to the Spain squad days later and now intends to represent the country of his birth, although he has yet to make a senior appearance.

"I will always be grateful to [former Spain manager] Robert Moreno, who included me in the squad,” he added.

“All Spanish players want to play for the national team. “I spoke to Mali and they understand; I've never lived there and I never said I was going there. My intention was always to play with Spain.”

Traore and Wolves return to action when Liverpool travel to Molineux on Thursday.