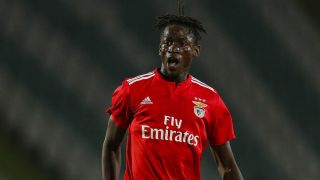 Benfica ended their Champions League hoodoo as Alfa Semedo scored a stunning goal to secure a 3-2 victory at AEK Athens in Group E.

Viktor Klonaridis' second-half double looked to have clinched a share of the spoils for AEK, who had taken full advantage of Ruben Dias' red card late in the first half.

Yet Benfica, who were 2-0 up by the 15th minute thanks to Haris Seferovic and Alex Grimaldo, rallied through substitute Semedo's solo effort on his debut in the Champions League proper.

The victory ends Benfica's eight-match losing streak in the competition, getting them off the mark in a tightly-contested Group E.

Benfica were ahead inside six minutes, Seferovic reacting sharply to tuck home on the rebound after Vasilios Barkas parried Gedson Fernandes' strike.

100 - Haris Seferovic has scored SL Benfica's 100th Champions League goal - Benfica have become the 27th team to reach 100 goals in the competition and just the second Portuguese side after FC Porto. Centennial.October 2, 2018

AEK were carved open again not long after, Grimaldo making no mistake with a neat header from six yards.

The hosts were handed a boost on the stroke of half-time, however, when Dias picked up a second booking for a high kick on Ezequiel Ponce.

Dias' recklessness was soon punished - Klonaridis getting the better of his marker to turn in Niklas Hult's low cross.

Klonaridis should have completed the turnaround with 19 minutes remaining, only to fire straight at Odisseas Vlachodimos, and Semedo soon made the hosts pay.

Having picked up the ball inside Benfica's half, the youngster powered through AEK's midfield before dispatching coolly to clinch the points.

What does it mean: Benfica's torrid run comes to an end

Benfica lost all six games in last season's competition and seemed to try their best to throw this result away in Athens, but Rui Vitoria's side ultimately held firm to claim a first Champions League win in nine attempts. AEK, meanwhile, are rooted to the bottom of Group E.

Semedo wasted little time in stamping his authority on proceedings, with his pace and power proving too much for AEK to handle. To round it off, the 21-year-old supplied an unerringly accurate finish following his wonderful solo run.

Benfica were in complete control until Dias' reckless challenge just before the break, and the defender can count himself lucky that Semedo spared his blushes.

There are two huge games coming up for both of these sides. While Benfica host Porto in the first O Classico of the season, AEK will look to bounce back against Olympiakos.