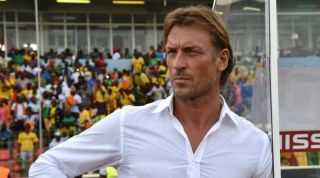 The Elephants have been widely regarded as one of Africa's best sides over the last decade, though they have failed to truly make the most of the talent at their disposal.

Final defeats to Egypt and Zambia – in 2006 and 2012 respectively – remain their best efforts since winning the title in 1992, with the country's so-called 'golden generation' struggling to match expectations.

But, Renard still has the likes of Wilfried Bony, Yaya Toure and Gervinho available to him and he has called on his talented squad to finally make the most of their potential.

He told reporters: "If you don't get through [the group stage] with a team like Cameroon or the Ivory Coast or Senegal, you get the finger pointed at you.

"For a team like this, the Africa Cup of Nations begins in the quarter-finals.

"All the teams in the last eight will want to get to the final - we are only three steps from the title.

"We do this job to win. We won't be happy if we lose in the semi-finals or even in the final, because if that happens it will always come into your mind for the rest of your life."

While Ivory Coast scraped through with a 1-0 win over Cameroon in their final Group D match, Algeria caught the eye as they finished level on six points with Group C winners Ghana.

Algeria were tipped by many as potential title-winners, although a 1-0 defeat to the Black Stars ensured they only finished second in their pool.

Christian Gourcuff's men go into the quarter-finals as the competition's top scorers with five goals, and they can draw on memories of beating Ivory Coast in extra time at the same stage five years ago.

Gourcuff has tried to play down the pressure on his side, and insists that progression from a tough group is a victory in itself.

He said: "After the Ghana game we were not the worst team in the world just because we conceded right at the end.

"Credit to the players for going out and getting the win [against Senegal in their final group match]. It was not easy to get out of this group."

Gourcuff does have some injury concerns to contend with, though, as Islam Slimani (muscle) looks set to miss the rest of the tournament, while Yacine Brahimi (back) and captain Madjid Bougherra (broken nose) are doubts.

Ivory Coast will be able to welcome back Gervinho, after the Roma striker completed his suspension for a red card in the opener against Guinea.

Cheick Tiote is also back from a ban.