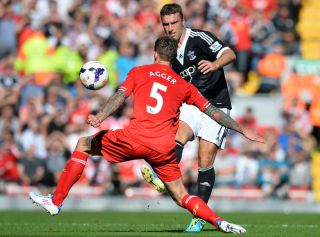 The defender was forced off just before the hour in his side's 1-0 Premier League defeat to Southampton on Saturday after struggling with a rib injury.

And Rodgers has now confirmed the Denmark international could miss the trip to Old Trafford.

"We'll see how he is for the game," the Northern Irishman said.

"He could be a doubt for that game as he has not quite recovered.

"We wanted to give him time at the weekend, but unfortunately he was struggling with his breathing because he got a knock to his ribs.

"But we'll see. He's a player who makes a good recovery and we'll see over the next 24 hours how he gets on for the game on Wednesday."

Jose Enrique was forced into action due to Agger's injury against Southampton, even though the full-back was not fully fit with a knee problem.

Rodgers said that while he had hoped to rest the Spaniard for Saturday's game, he is now back in full training and is set to be available against United.

"We decided to miss him out at the weekend to allow him to be involved over these next couple of games," he added.

"But he's training and he's fine. We just need to protect his load and the last thing we wanted to do was lose him."