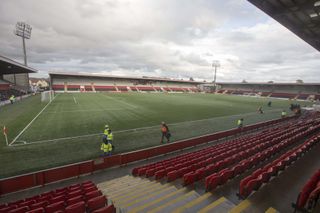 Aidrieonians will mothball their academy and reserve team this year in order to negotiate the first team through the coronavirus crisis.

The Scottish League One club will reassess their decision at a later date but warned that several other clubs may have to take similar action.

A statement on the club’s official’s website read: “Unfortunately Airdrieonians FC have taken the difficult decision to mothball our academy and reserve team operations this year, with a view to reassessing at a later date.

“The issue of preparing our facilities for reintroducing the professional game in a safe workplace environment for our first-team players is crucial, and we doubt that there will be many academy or reserve teams next season as most clubs are having the same crisis management issues at this time.

“We are grateful to all of our players, coaches, and support staff for their fantastic efforts over the years, with the winning of last season’s Reserve League Challenge Cup being a particular highlight.”

The 19-year-old joins the Lanarkshire club from Montpellier, the club where his father began his career, reportedly on a 12-month deal.

Robert told airdriefc.com: “I’m very happy to sign for Airdrie, it’s a club with a good structure and a good stadium.

“I think this is a good opportunity for me to come to the UK and play first-team football.

“When I met with the people at the club I got a good feeling from them – and for this reason I think it will be a good platform for me to come and show my abilities in a competitive league. I can’t wait to get started.”

Director of Football Stuart Millar said: “We are delighted to acquire the services of such a talented young player.

“Thomas could have joined any club in Europe but showed a desire to continue his football education at Airdrieonians as part of his longer-term plan of joining a top club in the UK – a decision we are naturally thrilled about.

“Thomas will excite our fans with his pace and dribbling ability, although we must allow him time to settle in a new country.

“We are very grateful to his representatives for entrusting our club with such a gifted young player.”