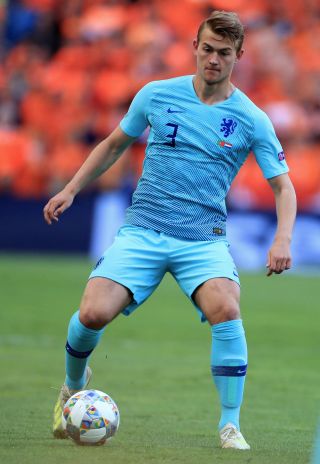 Matthijs De Ligt does not know what colour shirt he will be wearing next season, with the highly rated Ajax teenager planning to mull over his options during the post-season break.

Barcelona, Manchester United, Juventus and Paris St Germain have all been strongly linked with the 19-year-old, who has impressed so much for club and country this season.

It certainly appears a case of when rather than if De Ligt leaves Amsterdam, but the centre-back is in no rush to make his decision after ending the season with a 1-0 defeat for Holland in the Nations League final to hosts Portugal.

Asked what colour shirt he would be wearing next season, he said: “I don’t know. I don’t know.

“Now I am going on vacation and I just take a rest, relax and then I will see.

“When you rest you have enough time to think, so that’s good.”

Cristiano Ronaldo asked the teenager if he was joining Juventus after Sunday’s final, while Liverpool and Manchester City have also been mentioned as possible destinations for one of the stars of Ajax’s run to the Champions League semi-finals.

Asked how he reflected on the campaign, De Ligt told Press Association Sport: “I think it was a difficult end to a memorable season.

“I think in the beginning we didn’t expect to reach the final, but we did and if it is a final you want to win it.

“I am not happy that we lost but proud that we came here.”