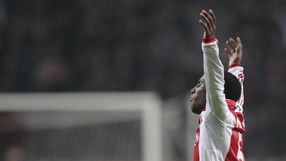 Ajax are top with 58 points after 28 matches, one ahead of Alkmaar. Twente Enschede, 2-0 winners over visitors Roda JC Kerkrade on Saturday, are third on 55 points.

Midfielder Theo Janssen opened the scoring for Ajax after 25 minutes netting from close range following an effort from Lorenzo Ebicilio which would have gone wide.

Ebicilio doubled the lead early in the second half notching in a rebound before Christian Eriksen, Vurnon Anita (pictured), Siem de Jong and Kolbeinn Sigthorsson wrapped up an eighth straight win for the title holders.

Marco van Ginkel put Vitesse ahead though a deflected shot straight after the interval but Simon Poulsen scored just before the hour to salvage a point for Alkmaar who finished with 10 men after a second booking for Brett Holman in the 63rd minute.

PSV Eindhoven, Feyenoord and Heerenveen, who all won on Saturday, are still in the title race four points behind the leaders.