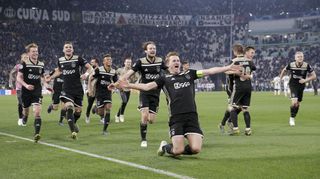 Ajax are the surprise package of this season’s Champions League following their march to the semi-finals.

After hammering holders Real Madrid at the Bernabeu in the previous round, Erik Ten Hag’s brilliant young side knocked out Cristiano Ronaldo’s Juventus with another stunning win in Turin.

Here, Press Association Sport takes a look at the secrets of their success.

Ten Hag’s first managerial job was with Go Ahead Eagles in 2012, before moving to Bayern Munich II between 2013 and 2015. The Bayern first team were led by Pep Guardiola at this time and the Spaniard’s influence on Ten Hag is evident.

A return to his homeland saw the Dutchman exceed all expectations at Utrecht with back-to-back top-five Eredivisie finishes and Europa League qualification. He was appointed Ajax boss in December 2017.

Frenkie De Jong and Matthijs De Ligt are among the brightest prospects in European football and form part of the crop of young talents coming through at Ajax. Barcelona have already snapped up De Jong, the midfielder set to join the Spanish champions on a five-year contract for €75million in the summer.

Captain De Ligt looks like he could be the next to leave, with the likes of Barca, Real Madrid, Manchester United and Arsenal reportedly keen to sign the 19-year-old.

Ten Hag has rejuvenated the careers of Dusan Tadic and Daley Blind, who were signed during the summer following a frustrating campaign for both men in the Premier League last season.

Former Southampton forward Tadic became just the ninth player in history to get a perfect 10 out of 10 score in L’Equipe’s infamously ruthless player ratings for his performance in Ajax’s 4-1 victory in Madrid last month.

Guardiola’s influence is clear but Ten Hag has also been true to the Ajax way pioneered by Johan Cruyff. That philosophy has seen Ten Hag mould a vibrant and energetic team led by an exciting blend of talented youngsters and aided by a few experienced heads.

Installing former players who understand the club in key off-field roles has aided the resurgence of Ajax. Marc Overmars is the director of football and has been credited with playing a major role in the assembly of Ajax’s precocious side. Meanwhile, Edwin Van Der Sar is currently working as the club’s chief executive.