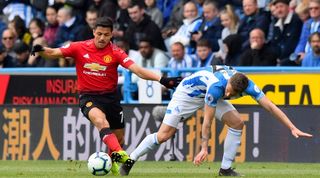 The Chile international clinched a season-long loan move to Inter this summer after falling out of favour with Ole Gunnar Solskjaer.

Sanchez became United’s highest earner when he arrived from Arsenal on a deal worth around £400,000 a week in January 2018.

However, he failed to replicate the form he showed at the Emirates as he scored just five goals in 45 games for the Red Devils.

"I've always said that. It's the club that's won the most in England.

"When I went to Arsenal it was fantastic - I was happy there - but United were growing at the time, they were buying players to win something.

"I wanted to join them and win everything. I don't regret going there."

The 30-year-old believes his lack of consistent opportunities played a part in his failure to hit top form at Old Trafford.

"I think that I'm happy when I play for my national team,” he said.

"I was happy at Manchester United too, but I've always said to my friends: I want to play.

"If they would let me play I'll do my best. Sometimes I'd play 60 minutes then I wouldn't play the next game - and I didn't know why."