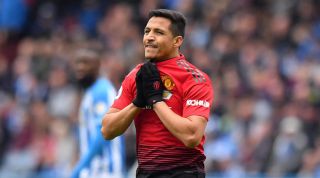 Inter are hoping to complete the loan signing of Alexis Sanchez in the coming days, report Gazzetta dello Sport.

The Serie A outfit are close to making a breakthrough with Manchester United as they attempt to bring the former Udinese forward back to Serie A.

Sanchez's huge wages at Old Trafford threatened to be an obstacle to a mutually agreeable deal.

However, Inter are now prepared to contribute £4.1m of the ex-Arsenal man's salary, with United making up the remaining £6.9m.

Antonio Conte's side hope to reach an agreement with United on Monday, before conducting Sanchez's medical on Tuesday.

The Chile international has scored five goals in 45 appearances for the Red Devils.

We really need to talk about Everton's defence – because nobody seems to be noticing...