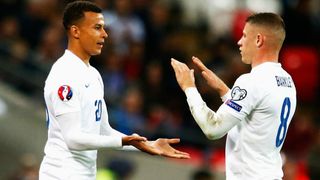 Tottenham midfielder Dele Alli has surpassed Everton's Ross Barkley for a spot with England, according to Jamie Carragher.

Alli scored the equalising goal as Tottenham picked up a 1-1 draw away to Everton on Sunday.

The 19-year-old has been a key figure in Tottenham's line-up this season, establishing himself as a regular starter in Mauricio Pochettino's side.

Carragher heaped praise on Alli after the game and believes the youngster is now ahead of Barkley in the England pecking order.

"You think about his performance and his goal against France. Now I expect him to be in the England squad, I actually think now he’s in the team," Carragher said on Sky Sports.

"I think Roy [Hodgson] and Gary [Neville], they play three in there. The one who has been playing regularly Ross Barkley, Dele Alli has surpassed Ross today.

"Now I’m a big fan of Barkley but they might be the two who are fighting for one position, that attacking midfield role, if they play three in there.

"The way he’s performed in the France game, the goal he got you would have to say it’s up to someone else now to take that position off him."

Alli, a £5million signing from MK Dons at the start of last year, will be hoping his performances lead to a start in England's first group stage game against Russia at Euro 2016.

"I think there’s always a player who comes on sort of late in terms of the international squad. I think he’s certainly one of them," Carragher added.

"Every time you talk about Spurs you think he’s been one of the best players.

"That’s a totally different position really, you’re playing with your back to goal at times, other times you’re facing the play so that just shows his understanding at such a young age to play different roles."