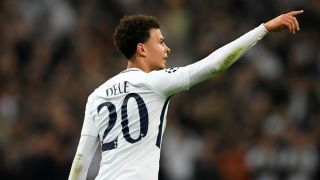 Dele Alli will miss Tottenham's Premier League clash against Crystal Palace with a hamstring injury, while third-choice goalkeeper Paulo Gazzaniga will make his Spurs debut in the absence of Hugo Lloris and Michel Vorm.

However, Alli joins an injury list that already includes Toby Alderweireld (hamstring) and Lloris (thigh) ahead of the visit of rock-bottom Palace, and must now be considered a doubt for England's upcoming friendlies against Germany and Brazil.

Gazzaniga, yet to make a competitive appearance since joining from Southampton in the close-season, was also a surprise name on Spurs' team sheet, after Lloris' first deputy Vorm sustained a knee injury.

Coincidentally, Gazzaniga's last Premier League appearance came against Spurs in December 2015 in a game where Harry Kane and Alli scored in a 2-0 win.