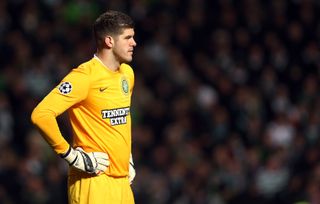 The current Barca number one has stated his intention to leave the Catalan giants at the end of the current season.

And, after Forster produced a strong performance against the Liga title holders in the UEFA Champions League on Tuesday, Alves admitted that he has been impressed with what he has seen from the 25-year-old in recent years.

"We have played Celtic three times in a year now and each time Forster has been fantastic," he was quoted as telling The Daily Record.

"He has had to deal with the best attacking players in the world and each time he has done very well – even in the games Celtic lost.

"Barcelona are a club that are always looking to add quality and it’s clear Forster has real quality.

"Obviously no transfers can be done at the moment – but if it is a deal that ever happens then he’d be a good addition."

On Thursday, Forster was called up the England squad for the FIFA World Cup qualifiers against Montenegro on October 11 and Poland four days later.

And Alves believes that the goalkeeper may soon be on the move if his level of performance continues at club level.

"It is an issue for Celtic that by doing so well at the highest level they are showcasing their best players," he continued.

"They lost one or two in the summer and with the way Forster is performing in Europe it is only natural there will be interest."