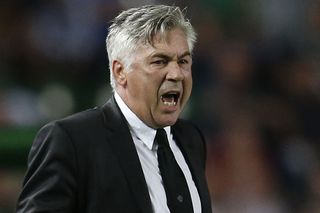 Di Maria was withdrawn in the second half of Real's 3-0 victory over Celta Vigo in La Liga and appeared to grab his groin while walking off the pitch.

The gesture was reported to be aimed at sections of the home crowd after a below-par performance, with Di Maria later explaining his actions as "misunderstood".

Ancelotti called for an end to the issue, adding that the winger is focused on his role at the club amid constant reports of a move away from Real.

"We have to believe the player. He's given his explanation. If anyone thinks that it was a rude gesture, he's apologised," Ancelotti said.

"The fans understand him. It's possible that he made a mistake but the issue has to be finished with quickly because we have a lot of matches and we need him."

Ancelotti also restated there would be no changes in his squad during the current transfer window.

"There won't be any changes," he said.

"We have a great squad. We don't have any unusual injuries and we hope to have (Raphael) Varane back in 15 days."